Petrus Oud Bruin is very well balanced sour, complex and fruity, that gets better as it warms. This beer pours dark amber with little foam. The aroma is warm malt, apples, bread, candied fruit... a lot of winter kitchen notes on the nose. I didn’t like the flavor quite as much as the aroma, but it isn’t like I had to fight to finish the bottle. This beer slips the mild sourness in at the front, with some caramel and fruit mid-tongue, and finishes with some malt punch. I enjoyed this and wouldn’t mind another glass. 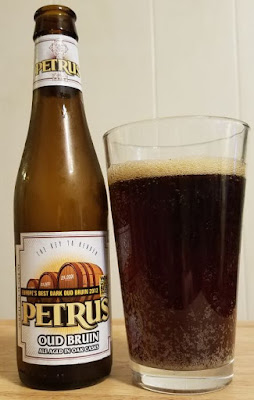 First things first, Petrus Pale Ale smells wonderful. It pours cloudy, dark yellow with a little bit of foam. The aroma is a song. It blends sour and rich and mellow tones beautifully. There is lime and cream and red wine vinegar and some spice, and I just sat and smelled it for a little bit before I ever sipped it. The flavor is really good, too. It starts out with the mellow character, borderline sweet and sugary, and then on the back of the tongue the sourness is high and tight. Just delicious. Far better than I had expected. I have no idea why I assumed this would be a middle of the road sour. I was wrong. It’s one of the clearest and best examples of a non-Flanders sour that I have enjoyed so far. 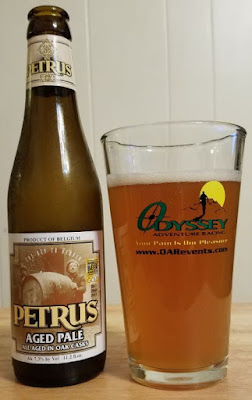 Monk's Cafe Flemish Red is a delicious, complex blended sour. It pours dark brown with average foam. The aroma is tart, rich, and malty. Dark fruit notes and a tangy punch blend together really well in the aroma. The flavor is great, the sourness hits on the front of the tongue, and the finish is great combination of warm, sweet malt and pungent tartness. Apple, red wine, and brown sugar are woven throughout the end of the sip. Just really tasty. 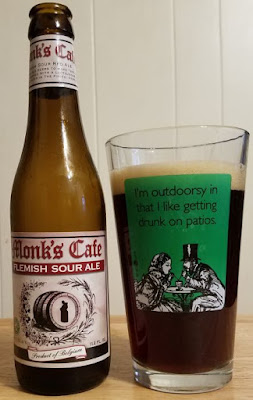 Roy Pitz Sour Hound is an OK little sour, although maybe a bit thin, and the finish leaves me a little on the "meh" side. It pours the orange/brown color of strong pekoe tea. Not much carbonation or foam. The aroma is slightly tangy, some apple cider, vinegar, a little hint of something like fig. The beer is clean and tart up front, and the finish is sour but evaporates very quickly. It seems to be on the verge of secondary notes when, poof, it’s just done. Not a particularly memorable beer. Not awful, but not special in any way. 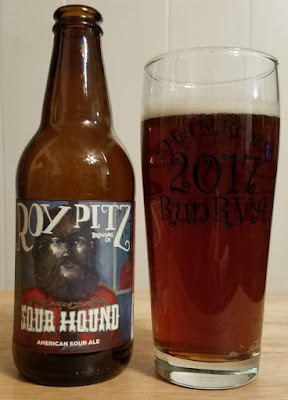 Blue Mountain Barrel House's Sour Geist is not a bad beer, but I was a little tired of it by the time I finished the bottle. It pours hazy orange/yellow with slight to average foam. The aroma is lemony and a little funky. A lot of these sours have a quality about them that I think of as "sweaty," and this is one of them. The flavor starts out bright and very tart, but on the finish it just fades to kind of a muted malt-bomb. Each sip was a little less enjoyable than the previous one. 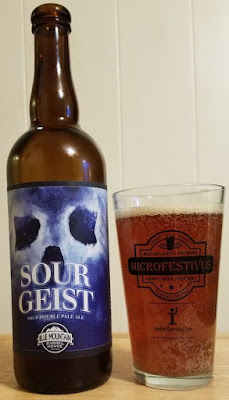 New Belgium's Clutch is a sour stout and it's the weakest of the New Belgium Lips Of Faith sour beers I’ve tasted. It just doesn’t work. It pours dark brown with very little head. The aroma is mild. There is a little bit of mild cherry and oak, and some coffee, but all of it is subtle. The taste ... well, there’s just no way around it. This beer doesn’t taste good. The front of the tongue is muted and dense, the flavor closes with a little bit of that cherry or berry sourness, but there is also an artificial, plastic kind of character throughout the whole sip. The taste reminded me of how band-aids smell. And not in a good way. No thank you. New Belgium’s Lips Of Faith sours are among my favorite examples of the style, usually. This is a rare exception. This beer is kinda crap. 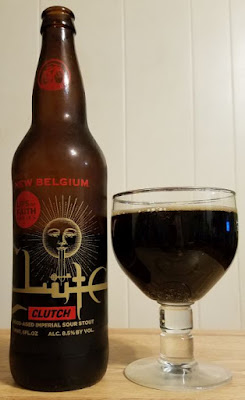