I love that each installment of Stone's Enjoy By Imperial IPA is usually a little different from the previous one. I thought that the Christmas 2015 release was the best one I've had yet, with a little more juicy punch than the beer sometimes features. But each release of regular Enjoy By (as opposed to some of the variants with ancillary ingredients) has been good. This first offering of Enjoy By (4-20-17) from the relatively new Stone facility in Richmond is another tasty one, as expected. I am indebted to my friend Adam for bringing me a crowler to sample, as is often the case. This iteration of Enjoy By pours bright orange/yellow with a fair amount of foam. The aroma is the usual bitter, citrus hop punch with explicitly lemon and tangerine notes. The flavor is bitter up front and closes with a great combination of that lemon from the aroma with a hint of sweet malt. It amounts to kind of a lemon meringue finish after a big, imperial IPA hop front end. As expected, this round of regulation Enjoy By is delicious, and shows no change my palate can discern from the San Diego brewery versions. You're nailing it here, Stone. Stay away from the chocolate and coffee and tangerine variants and keep turning this thing out. 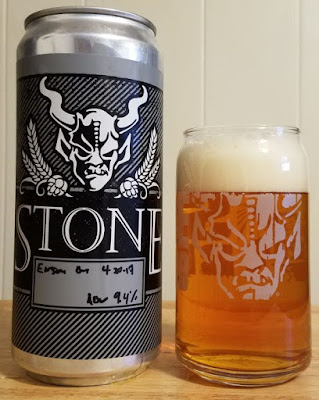 Stone's Richmond staff collaborated with Richmond's upstart Triple Crossing for Fulton Rising, a New England IPA so-named for the fact that Stone and Triple Crossing are both in the Fulton section of Richmond. As Triple Crossing is doing the release, I expected this beer to be typical of their IPAs. And it is, and that's a damn good thing. Fulton Rising looks like a New England IPA, cloudy orange with average head and lace. The aroma is big and juicy, tangerine and lemon and peaches, lots of fruity notes all mingling together. On the tongue, it is juicy up front, too, and then closes lean and bitter. I’d stop short of calling the finish dry, but it is crisper and cleaner than some NEIPAs. Maybe Stone contributed the elements that amount to that subtle quality on the back end? I’d love to see Stone themselves turn out a few beers like this rather than their usual big, biting west coast thing. Not that there’s anything wrong with that, either... but this combo certainly works well. 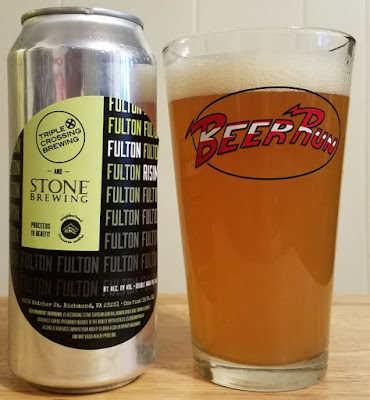 The Mango Grapefruit version of Waxing Poetic, Triple Crossing's Berliner Weisse, is just delicious. It's the kind of low ABV beer (4%) that I could drink all summer long. Mango Grapefruit Waxing Poetic pours cloudy yellow with a little bit of foam. The aroma is tangy tropical fruit juice, mango and grapefruit in concert with yeasty, banana type notes. The flavor is tart, tart, tart, top to bottom. I don’t notice the mango as much on the tongue, but the grapefruit is bright and refreshing ad juicy. Just wonderful tasting beer. 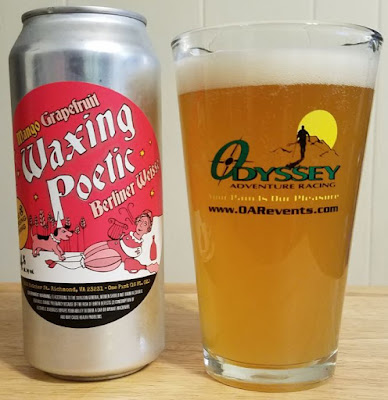 New Belgium's Voodoo Ranger 8 Hop Pale Ale is one of New Belgium’s better grocery store beers. Often it seems like New Belgium doesn't take their second string very seriously, at least not when compared to beers like the Lips Of Faith series. But this one, like VooDoo Ranger IPA, is tasty. It pours bright yellow with average carbonation and foam. The aroma is hoppy and comparable to other industry standard pale ales, like SNPA. The flavor is hoppy, too, but not clearly into IPA category. The malt is there, and obvious. It isn’t drowned out by the big hops, but it has to compete with it. The finish is slightly sweet. I can see me buying this again. 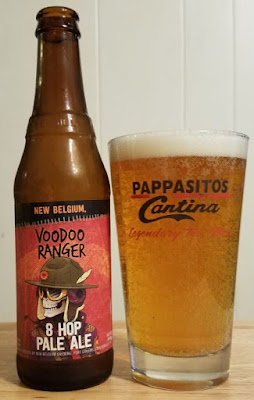 Whizbang is a hoppy blonde ale from New Belgium, and it isn't a show stopper. But it ain't bad. This beer pours clear, light orange with average head and a lot of carbonation. The aroma is like other hoppy pale ales, a little bit of bitter, floral hop blends well with a smooth malt. The taste is very mild up front but on the finish the hop/floral combo from the aroma comes back a little stronger. I can't bitch about it, but probably won't have it again. 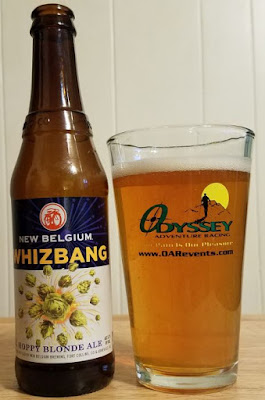 I'll say up front that I'm not in love with Rogue. I know they have their fans, but I typically haven't been one of them. I think Rogue is average at best. But this beer is above average. 7 Hop is a dense, brawling IPA that approaches beers like Palate Wrecker and RuinTen in terms of dankness, huge mouthfeel, and curb-stomping aroma. I’m amazed that the ABV is relatively low, given this beer’s forwardness. It pours dark, clear orange with thin foam. The aroma is pugnacious. The deeply bitter hop profile does not drown out the heaps of malt on the smell. The flavor is a giant blast of that aroma for the tongue, and the finish is very heavy and aggressive. This is a lot of hoppy anger to pack into a bottle with less than 8% ABV. Rogue has done something surprising here. 7 Hop a fine beer by any metric. 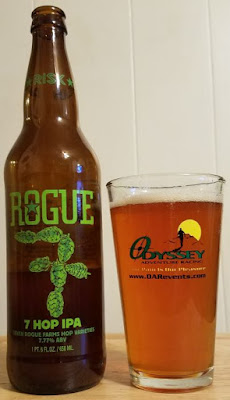