This set of six is all sours. The Sour Six. Sounds like a western.

Never Sufficient by The Veil is a Grodziskie/Gose/Lichtenhainer hybrid with cherries. Combining the styles is supposed to add up to smokey, salty, and sour. I don't get a lot of smokey quality, but the other notes are strong and tasty. Never Sufficient pours appropriately cherry red/pink with a trace of foam. The aroma is really complex and really nice. Cherries, cheese, tart and briney notes, and a little bit of warm, mild malt in the background. The flavor is all about the tart and piercing quality, with berries and salt up front in a big way. The fizzy finish has something like buttered popcorn in the background. Another outstanding mouth-twister from The Veil. 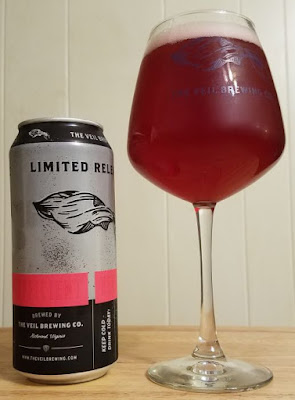 Brooklyn's Bel Air Sour is not bad, but on the light side of sour. Definitely more like a gose than a big Flanders brown or red. This thing pours slightly cloudy yellow with average foam. The aroma is so mild I can’t think of much to report on. A little bit of tart, lemony stuff and a hint of the malt. The flavor is one note, but it’s not a bad thing. Just a little burst of lemony, tangy tartness and then nothing else. Nothing at all on the finish. I’d probably not drink this again. 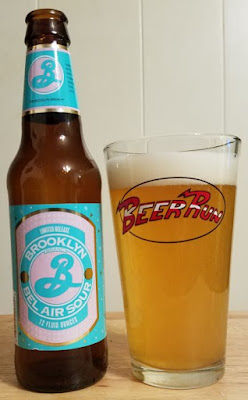 Avery's Raspberry Sour isn’t a bad beer, either. It’s actually better than I’d expected it to be, given that I found it at Sam’s Club for a fairly low price. But it’s definitely a stepping stone kind of beer. More aggressive than the light, crisp tartness of a goze or Berliner Weiss, but without the strong, intense, multi-faceted bombast of a Flanders style sour brown ale. This beer pours brown with reddish highlights and a decent amount of crackly foam. The aroma is heavy on the raspberries, but some oak is on the nose, too. The flavor is woody and dense up front, and closes with a blast of the raspberries and oak again, before a mildly malty exhale. I could do without the raspberry notes, I have to wonder if the raspberry flavoring is added to punch up an otherwise slightly muted sour brown. But, overall, it certainly isn’t bad beer. 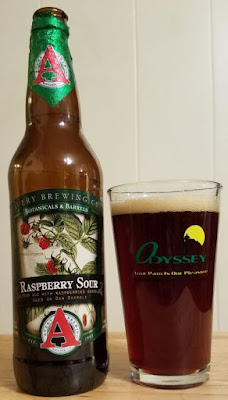 There have been a few sours I have hated, and others I've thought were damn near perfect. Boulevard's Love Child No. 7 Sour Ale isn’t damn near perfect, but it is damn near pretty damn good. It pours very clear copper/orange with a head that fades to a stubborn ring. The aroma is nice, apple cider and vinegar and a little red wine, but it’s understated. The flavor is also nice, although it starts out very much on the mild side and saves all of it’s cards to play at the end. In the finish I pick up on big red-wine vinegar, olives, lime and oak and smoke. I guess saving all your big notes for the finish is okay when they’re this big. Boulevard has a decent little winner, here. It’s pretty, pretty, pretty, pretty .... pretty good. 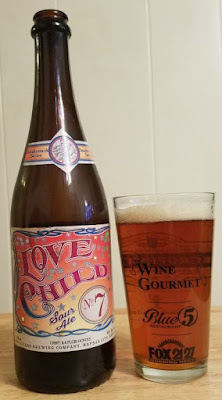 I like this sour a whole lot. Duchesse De Bourgogne pours dark brown with a huge, foamy head. The aroma is mingled tart and sweet notes, sour cherry, dark wine, apple butter, oak and some spice. The flavor is rich and complex, in fact it’s one of the most complex tasting sours I’ve had. The front of the tongue is where the tart/sour notes hit, along with some of the oak, and then the rich and sweet notes come through bigtime on the finish. There’s brown sugar, cranberries, walnuts, a little bit of red wine vinegar, all kinds of stuff going on. I could have this regularly. 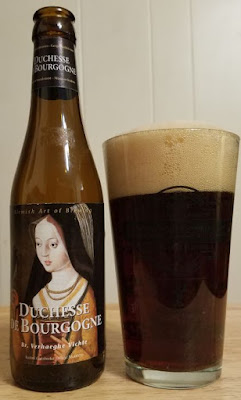 Given the quality and intensity of Rodenbach's Grand Cru Sour, especially with regard to the comparatively low price, I’m inclined to rate it among the best of the style that I’ve had. It’s just outstanding. This beer pours dark, clean copper brown with an average head. The aroma is yeasty and strong, fruit notes, tart apple cider, hints of the oak come through, too. Very big on the tongue from front to back. The oak is the dominant quality throughout, with a pungent, vinegar tone in the finish. This is an aggressive sour, one to save for after you’re acclimated to the style. But for sour fans, this is a must-drink. 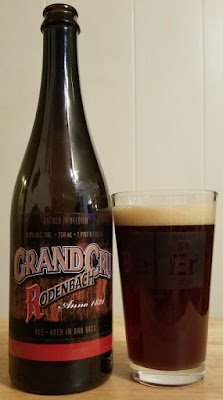