Six more, some current and some from the backlog. As is often the case, I'm obliged to my buddy Adam for giving me a bunch of these to taste. He's never once led me wrong.

The Answer's Alternative Hops pours pale yellow with an average amount of carbonation and foam. The aroma is really great. Strong citrus, pineapple, and piercingly strong, dank, slightly sweet pine notes. The flavor is great, too. Just like the flavor, citrus and pine, with a dry but lingering finish. Sticky mouthfeel. This is an example of what The Answer does exceedingly well. 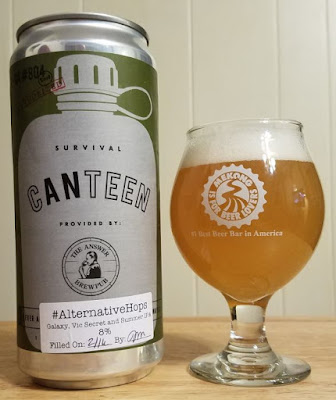 The Answer nails it again with this collaboration with Final Gravity. Final Answer pours slightly foggy yellow with average foam and carbonation. The aroma is Lemon, grapefruit, slightly musky character, vinegar and sweat in the background. The flavor is mildly malty up front, but on the swallow there is a lot of candied citrus and a bright, dry finish. Doesn’t play the juiciness card overtly, finishes clean and polished. Very well done, as I’ve come to expect from The Answer. 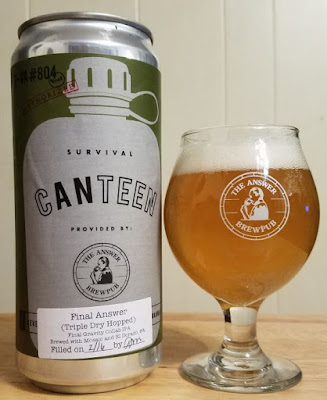 Soaring Ridge's Virginia Creeper Pale Ale is a simple pale ale, but it isn’t a bad one, and has a little more character than run of the mill lawnmower pale ales. Virginia Creeper pours slightly hazy golden with unremarkable foam and carbonation. The aroma is malty and somewhat dense. Some floral hops show up, along with something like coffee or chicory. The flavor is rich up front, then dry and crisp on the finish, with a little bit of kick. I’d gladly have another. 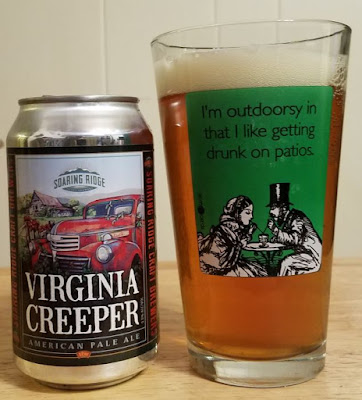 Avery's Raja Imperial IPA is a fine double, but I had Avery’s Maharaja first, and I can’t help but think of this as sort of a session version of that delicious, gigantic IPA. As of right now I have rated more than a thousand beers at RateBeer.com, and Maharaja is my No. 21 of all time. That's a big, memorable beer. There's no way to drink a beer named after that one without comparing them.

Raja pours cloudy yellow with average head and light carbonation. Like Maharaja, the aroma is maltier than I expect from a double IPA. But it’s a delicious aroma, with fruit and citrus tanginess behind the buttery richness. The flavor is rich and smooth and tasty, with the juicy IPA qualities working with, rather than drowning, the smooth malt. This beer doesn’t benefit from the branding, which forces Avery fans to compare it to the far superior Maharaja. But it stands on it’s own, and it’s a fine beer. I rated this beer a 4 out of 5 at RateBeer.com. It's a serious statement about the superiority of Maharaja that I consider this a less-than.

I've been up front that one component of my reviews is price. I don't give a fat godamn how tasty a beer is. If the price is high enough to make it cost prohibitive, my review will not be glowing. Maharaja is a beer that I consider to be very expensive. It is also remarkable enough to be worth the occasional purchase. Raja is not as expensive as Maharaja, and it's very good, but still a step down. All of this is appropriate and none of it is a negative. It's also ultimately an underwhelming experience, and I blame Avery's marketing people for the marginalization. 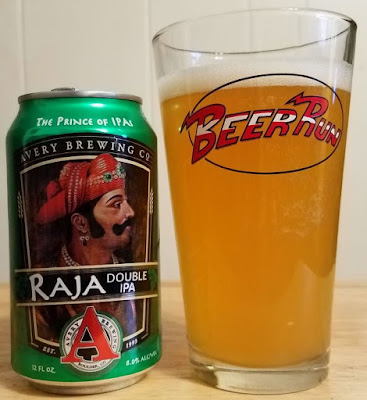 Jackie O's Oro Negro is a delicious imperial stout with huge, rich, malty character and really nice secondary notes in the finish. It pours dark brown to black with very little foam. The aroma is big, strong, bitterly roasted malt with a little bit of the pepper and cinnamon present, too. The flavor is rich and strong and malty, too, and the walnuts cocoa come through in the finish. What a great stout. 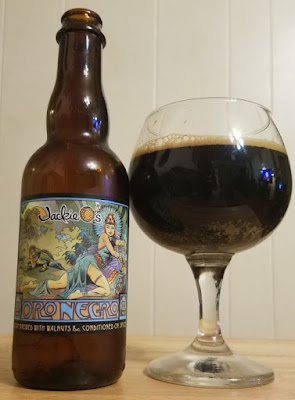 Sanctuary is a Double IPA from Triple Crossing's big Lockout Series. It pours very cloudy orange with a head that quickly fades to a rim ring. The aroma is super juicy, I could smell gigantic citrus aroma while I was pouring the can. The nose has bright grapefruit and lemon, some vanilla, and some starchiness. The flavor is more to the dry side, but it isn’t remotely subtle. That lemon/citrus thing is really strong mid-tongue before acerbic dryness hits on the back, followed by a little shot of alcohol vapor. A lot of these cloudy, citrusy, nearly boozy IPAs do play from the same bag of tricks, but I’m nowhere near tired of it. This beer is a another take on a familiar song, but, damn, the pitch is perfect. 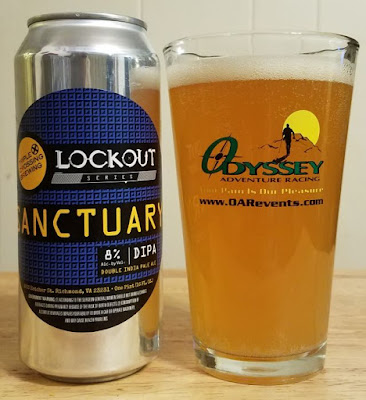