Because of the juniper and strong gin-influenced flavor, to me Stone's Jindia Pale Ale is closer to an American Strong Ale, like Arrogant Bastard, than the usual Stone heavily hopped double IPAs. It pours clear orange to copper brown with thin foam. The aroma is where the lemon shows up, along with the botanicals and hints of spice, liquor and some of the malt. Juniper and the big gin character dominate the flavor, and the finish has a strong kick to it. I grew to like this over the course of a six-pack, although I didn’t really know what to make of that first bottle. 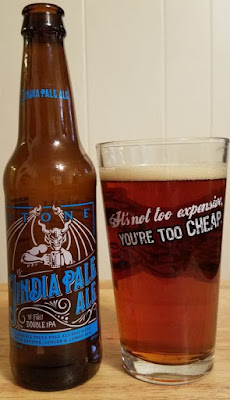 Stone's Vanilla Bean Porter is OK. I don't think it's substantially different from the Smoked Porter With Vanilla Bean from a few years ago. This tastes as smoky as I remember that porter tasting, and the vanilla is slight here, as it was with that porter. It pours dark brown with average head. The aroma is more like coffee than vanilla. They could have called this a coffee porter and I'd have had a better idea what to expect. The flavor is slightly smoky, slightly strong, and the finish hints at vanilla and a little bit of hops. I won't go out of my way to have this again, but there isn't anything wrong with it. 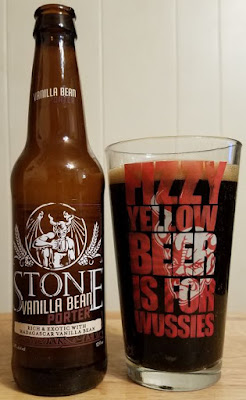 After all this time, Hardywood has finally released a flagship IPA. VIPA, or Virgindia Pale Ale, is among the best of the Hardywood standard fare that you might find in a grocery store. It pours golden yellow with average foam. The aroma is lemony and sweet. The malt is bigger on the tongue than it is in many IPAs, but it’s a delicious, buttery malt. The hops are grassy and bright and come through in the finish. Really nice. 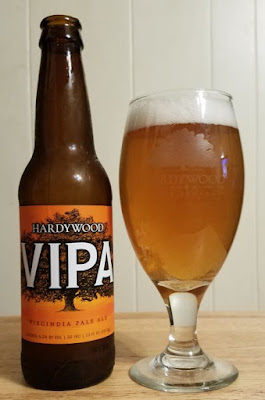 I liked the Mango variation of Hardywood's VIPA at the Charlottesville tap room, so I brought home a growler pour. The growler may not have sealed properly, because at home the beer seems a little flat, and it just wasn’t as good as I remember it being at the bar. It still pours bright, clear yellow in color with average head. The aroma is somewhat like the sweet, citrusy smell of original VIPA, but with the addition of mango notes. The mango adds to the flavor, but hides the nice, buttery malt backbone I enjoy on regular VIPA. And the finish is slightly synthetic. I’m glad I tried this but I’ll stick to Great Return and regular VIPA when choosing an IPA from Hardywood. 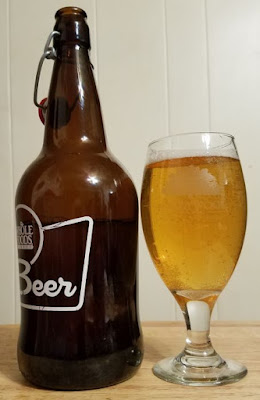 Maybe it should have been a tip-off that Uinta didn't bother coming up with a unique name for this Barrel Aged Stout. And there is absolutely nothing unique about it. I’m not even sure who this would appeal to. It’s just a very middle of the road stout with no real indication of barrel aging. It pours dark brown with a little bit of foam. The aroma is mild. Damn near undetectable. There just isn’t anything there, you have to practically suck it up your nose to get any aroma of malt or any other character. The flavor is as meh as the aroma. I don’t taste the bourbon barrel, I don’t taste any secondary notes, no coffee, no licorice, no tobacco, no spice, no molasses, no chocolate, no vanilla... none of the things I have come to expect in bourbon barrel aged stouts. It doesn’t taste bad, but, hell, clean water doesn't taste bad. This is as nominal as stout gets. 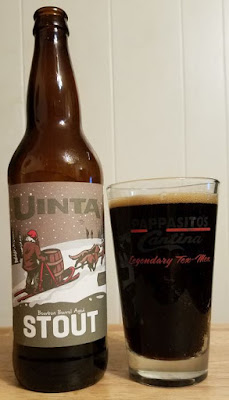 This right here? This is the winner in the bunch. I think that Fortification, a barrel aged barley wine by Parkway, is fantastic. It's right up there with For Lovers Only stout as one of the best things I’ve had from Parkway. Fortification pours very dark copper color with a quick fading bit of foam. The aroma is great. On the nose it’s all sweet stuff, like vanilla and milk chocolate and honey and toasted coconut. Not complex, totally to the sweet side, but just a wonderful bouquet. The flavor is strong and rich and dense. The sweet stuff on the aroma is there, but it’s in the background. What’s up front is the whiskey and oak from the barrel aging, and the 12.5 ABV is not remotely apologetic about it’s presence. This beer manhandles the palate, but I ain’t complaining. 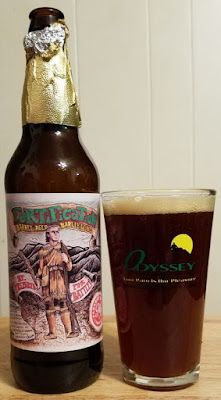