Starting 2017 with a set of six focused on Oskar Blues.

Oskar Blues Priscilla Wheat Ale is watery and too sweet. It pours pale yellow with a lot of foam. The aroma is like a muted version of any wheat beer; bananas, some citrus, some sweetness, mild vanilla. The flavor is OK on the front of the tongue, but it turns to water immediately and closes with a muted meh kind of nothingness. It doesn’t taste bad. I guess at least there’s that. 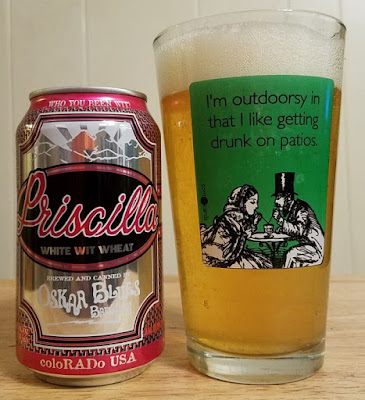 Oskar Blues calls Beerito a Mexican lager. It isn’t completely horrible. It pours darker than I’d expected it to, kind of an amber brown. The aroma has a little bit of hoppiness and some mild honey notes. The flavor is very restrained. Mild, slightly malty, with a tiny bit of hoppy twist at the end. Sure, OK, whatever. 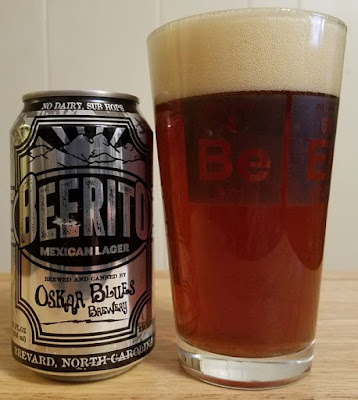 Passion Fruit Pinner is billed by Oskar Blues as a "throwback IPA." It's OK. It would be a decent lawnmower beer. Pours only slightly cloudy orange, lots of foam, lots of carbonation. The aroma is fruit and hay and some pine hop character. The flavor brings a not unpleasant wash of tropical fruit, grassy hops, and just a tiny bit of bite. As session beers go, I’ve had worse. 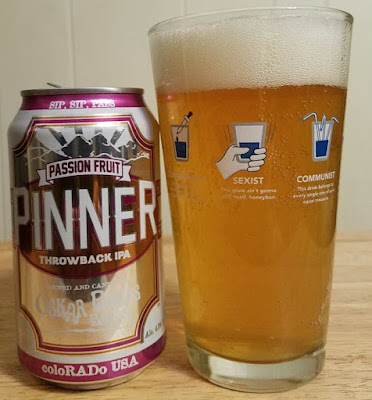 Oskar Blues Hotbox is a coffee porter. And it is a tasty, slightly sweet, rich, coffee-drenched porter that I thoroughly enjoyed. It pours dark brown with a tan head. The aroma is a lot like any good porter... malty with slight notes of molasses and sugar. The flavor is ok up front, but the close is what really sells it. A giant wash of rich, slightly sweet coffee on the finish makes this thing really stand out. 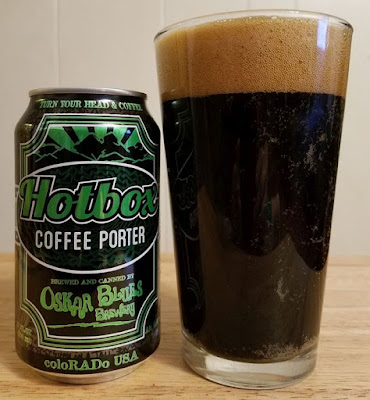 Death by Coconut is a coconut flavored porter from Oskar Blues. It pours medium brown and thin, like iced coffee. Aroma is coconut, caramel, chocolate and coffee. The flavor is a coffee Porter malt thing up front, but the toasted coconut is huge on the finish. ABV is no presence at all. Pretty tasty stuff. 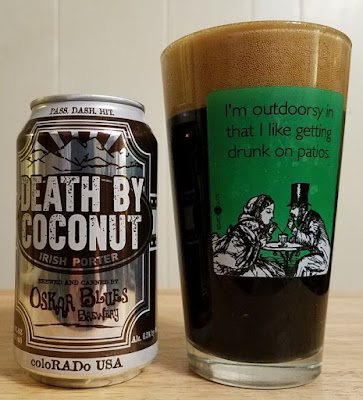 There was a lot of novelty in this can of Barrel Aged Chubna. It’s a blend of Oskar Blues Gubna Imperial IPA and Old Chub Scotch Ale, aged in Buffalo Trace Bourbon Barrels, and it was the first beer I’ve had in Oskar Blues new Stovepipe cans. It pours dark copper/orange color with average head. The aroma and the flavor both remind me very much of the barrel aged version of Arrogant Bastard, and from me that is a real compliment. It’s smokey, slightly sweet, with some strong scotch and molasses qualities, but there is serious hops fireworks going on here, too. The finish is a malt bomb in the best way, and the bourbon barrel comes through from top to bottom. Very good beer. 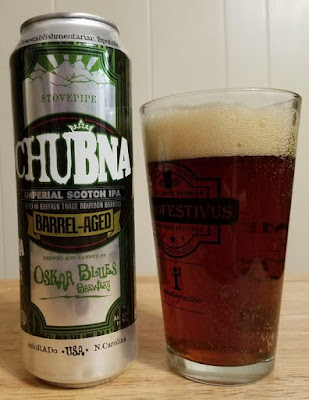