Stone's Enjoy By 2-14-17, with coffee and chocolate, doesn’t really work. Certainly not in comparison to Stone’s regular Enjoy By releases. This beer pours cloudy orange and the second pour from the 22 oz bottle was particularly clumpy, as an unfiltered beer can tend to be. The aroma is like a Stone IPA, strong hops, bitter and almost astringent pine and floral notes dominate the nose. The flavor is bold, bitter, and strong. I do pick up on the chocolate in the finish, and I suppose the coffee, too, but it all conflicts with the normally refreshing citrus punch of regulation Enjoy By. I don’t know why Stone keeps monkeying with a good thing, not one of the Enjoy By variants they’ve released in the past year can compare to the straight stuff. 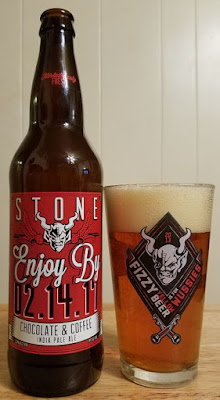 Hardywood bills Virginia Blackberry as a summer beer, but I think I think that anyone who enjoys it would enjoy it year round. It pours light copper color with a little bit of foam. The aroma is slightly tart and sweet, the blackberries are there, but Belgian ale qualities, like bananas and squash, are also a presence. The flavor is where the blackberries really move forward, all over the front of the tongue and the finish. But the Belgian esters and mild malt aren’t entirely suffocated. This isn’t a style I seek out, but it is pretty good. 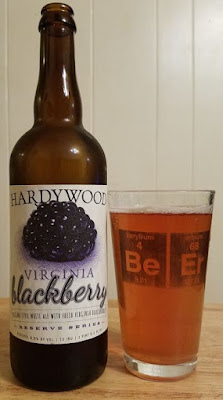 The Answer's Piece Of The Action is a mosaic hopped beer with all the usual lemony mosaic notes, a clean finish, and a light body. The beer pours yellow with a whole lot of foam. The aroma is fantastic. I let the foam clear for a minute and could smell it from across the table. I couldn’t wait to taste it. The lemon, citrus, and hay on the aroma are strong on the flavor. The finish is dry and bright, with a little bit of vapor. One more damn fine beer from The Answer.

I'll say it again... now is the time to be a fan of Virginia craft beer. There are so many good Virginia breweries right now that it's just hard to comprehend it. In Richmond alone there's Hardywood, The Veil, and The Answer (any one of which is a candidate for any number of superlatives.) Then there's Apocalypse in Lynchburg, South Street in Charlottesville, Parkway in the Roanoke-Salem area... Virginia craft brew fans are dealing with an embarrassment of riches these days. 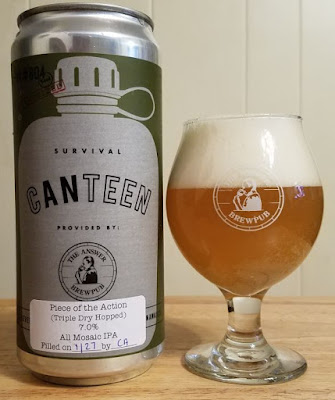 I had New Belgium's Bretta IPA on tap at the brewery in Asheville last October. I liked it a lot. This review is for the bottled version, which I don’t like as much. It’s still very good, but with New Belgium, more than any other brewery I can think of, there seems to be a lot of difference between the keg and the bottle. This bottle poured clear yellow with a lot of carbonation and an absurd amount of foam. It took forever to pour this. The aroma is funky and weird and really nice. The fruity character is an undercurrent behind the unique, weird stuff. The aroma reminds me of lemons, musty leaves, spices, sweat, and steamed vegetables. The flavor doesn’t seem to quite deliver on the aroma’s complexity. It’s bitter and strong, aggressive, definitely hop forward. I like that, but I remember being surprised by this beer at the brewery. In the bottle it’s still very good, just not quite what I remembered. 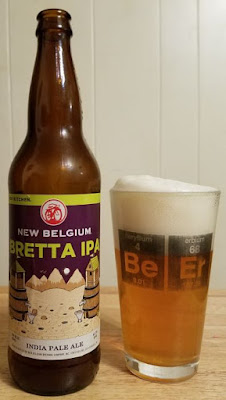 Ten Fidy is already one of the best imperial stouts around, and this barrel aged version actually takes it up another tick by adding to an already complex beer. I got to taste this at the brewery last fall. Later I had it on tap at Barrel Chest. On tap, this is as good as the style gets. From the can it is still very good, but seems just a little hotter and not quite as well matured. It pours black with a trace of cherry/tan head. The aroma is all of the usual Ten Fidy stuff, bitter roasted malt and coffee and a little bit of cherries, but the bourbon barrel aging adds vanilla and some undeniable kick. The flavor is not as well balanced as the aroma, at least from the can. The bourbon is a little dominant, and the aforementioned heat unavoidable. It tastes and feels like the 13 percenter that it is. But I cannot fault a beer for packing a punch, especially when it delivers as deliciously as this does. Barrel Aged Ten Fidy deserves to take its place with KBS and Bourbon County as one of the highly sought-after American craft stouts. 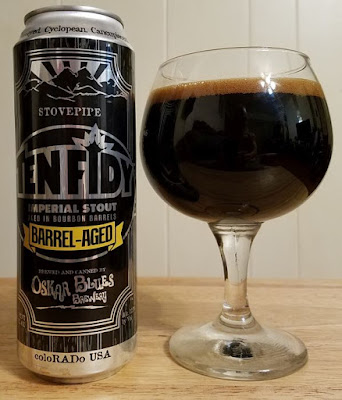 I didn’t expect to enjoy the Cinnamon-Raisin version of Ballast Point's Commodore Stout very much, but it’s really pretty OK. The cinnamon and raisin addition is there, but it isn’t too much, it doesn’t dominate the flavor. This beer pours dark brown to black with average head. The aroma is like regular Commodore, there’s a coffee and roasted malt character with some of the cinnamon present in the nose. It’s there mid-tongue, too, but the beer still finishes with the fairly strong roasted malt character that makes the original stout pretty good. I didn’t mind this at all. 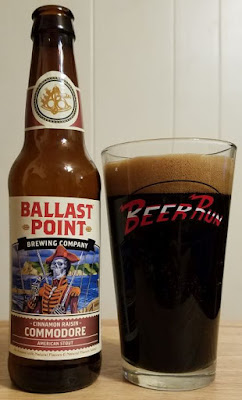