The Bruery's Terreux Batch No. 1731 is billed as sort of a session sour. It might be a good gateway between the IPA and sour styles. It’s fairly straight forward, not aggressive, but funky and a little tart. It pours yellow with a huge head and a decent amount of carbonation. The aroma is remarkably well balanced. The first thing I pick up on is the tart brett fermentation, blended well with the triple hop bill. Notes of sour apples, cheese, and taffy blend with dry, bright, lean hops on the nose. The flavor is all of that but closes with a piercing dry bite that is outright shocking (to me) for a beer with the word "session" on the label. It speaks well of The Bruery that their "session" sour still kicks some. This beer is absolutely IPA, absolutely a stun-grade sour, and yet absolutely a session beer. That’s a lot to play in one hand, but every suit is present. 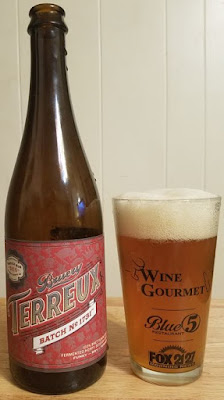 Hardywood's Gingerbread Stout can stand up to just about anything Hardywood decides to throw at it, and it seemingly always adds the new elements to it’s ensemble gracefully. The regular recipe is delicious, and the Brandy Barrel, Bourbon Barrel, and Coffee versions are all even better. This version, Kentucky Christmas Morning, with both bourbon barrel aging and coffee fusion, is also delicious. But I think the coffee gets a little lost in the avalanche of flavor. It pours coffee/chocolate brown with big, tan had. The bourbon and gingerbread character are strong on the aroma and very strong on the flavor, just like the bourbon barrel aged version of GBS.

To my palate it’s also just a notch hotter than the bourbon barrel variant, which is odd since it’s actually about half a tick lower in ABV. I expected the coffee to show up in the mix in a big way, too, and it just doesn’t. Still, when my principle complaint is that it tastes like BBGBS (a delicious, incredibly well-crafted stout), it’s hard to consider that a complaint. Coffee? Sure, the label says so, so I guess it’s there, but I don’t taste it. All I taste is another delicious Hardywood barrel aged, malty masterpiece. 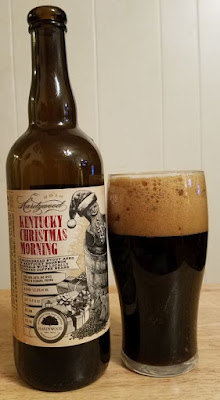 Paranoid Aledroid by Triple Crossing is is a delicious, really creamy, citrusy pale ale that would be fantastic for session consumption. It pours hazy yellow with a ton of head. The aroma is grassy and slightly tart, and there is a sweet fruit and citrus character to the flavor that I could drink all day. Bananas, pineapple, a bready, wheat beer backbone... it’s hard not to suck this down in a hurry. 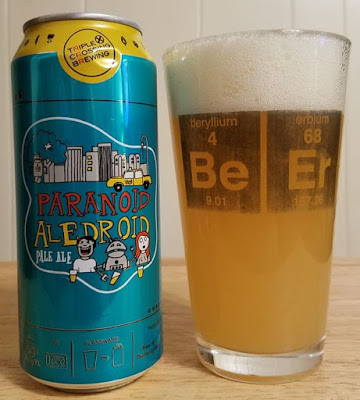 Hardywood's Cassowary is the base Imperial stout for several of their other beers. It's a very, very sweet stout that became a little too sugary for me by the end of the bottle... but as a beer to share with friends as dessert, this would be just about perfect. It pours black with a lot of tan head. The aroma is huge baker’s chocolate and a little bit of chicory, a little bit of anise. The flavor is super sugary, as you’d expect from a big milk stout. All that lactose is a giant sugar bomb, which dominates the baker’s chocolate and coffee/roasted malt qualities. It’s a good beer, but this is definitely one to share. 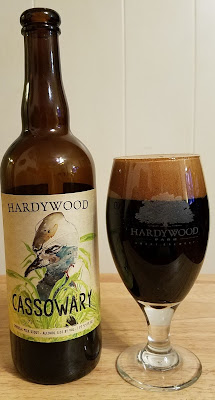 Clown Shoes Hammer Of The Beast is kind of a "stunt beer." It's a blend of two stouts and a barley wine, aged in rum barrels. High concept stuff for sure. This beer pours dark brown to black with a light tan head. The aroma is fascinating. The first thing I notice is the rum barrel aging. The aroma is slightly sweet and boozy, with barley wine character coming through after the rum, and molasses and brown sugar and herbal notes blending with a bunch of malt. Then the stout comes through on the flavor in a big way. Coffee and chocolate kind of swirl and mingle with the barley wine notes, although the flavor is dominated by the stout. I enjoy the way this beer plays one card distinctly, and then the other, without ever losing a bit of it in the shuffle. I don’t know that I would want it every day, but this is as unique and tasty as a novelty beer can be. 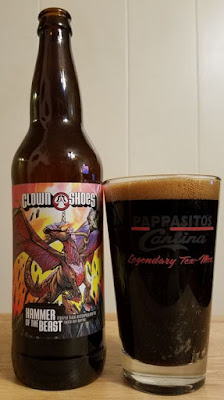 Great Lakes Blackout Stout is a very bold, bitter, strong stout that holds it’s own even in the current onslaught of fantastic stouts and porters turned out by American craft breweries. The body is black with a thin, cream-colored head. The aroma is rich and malty, with some hoppy notes in the background. Big, rich, roasted bitterness all over the flavor, and the finish offers a lingering look at that 9% ABV. Well done. 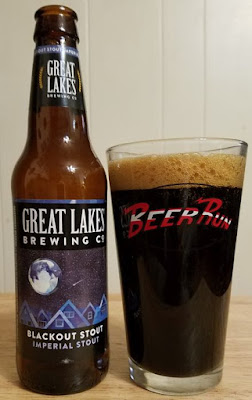