When I visited New Belgium's brewery in Asheville last week, I had an opportunity to sample the 2016 release of La Folie, New Belgium's lauded sour brown ale. I first tried La Folie on June 6, 2013. This was my first foray into the complex and demanding world of sour ales, and I posted a perplexed review here at the blog. 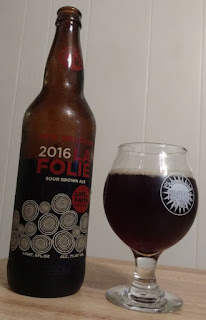 Last week, at the brewery, as I took my time enjoying the aroma and intense flavor of La Folie, I remembered how this beer had knocked me for a loop three years ago. I'm honestly surprised at how much my palate has changed in the three years since I first tried this absolutely wonderful beer. I didn't enjoy it at all in 2013, but in my defense, I did recognize my reaction as the flinch of someone newly exposed to a sensory overload. As I wrote then:


This beer is not trying to cozy up and be your friend. You'll like it on its terms or you won't like it at all. I cannot say I really enjoyed this beer, but I can't remember the last time something bowled me over like this did.

Well, a lot has changed since then, and many of those changes have taken place in my own mouth. The relative popularity of sours, along with the demand for lightly tart, fruity beers (gose and the like), have given me opportunities to fine tune my palate more carefully. I suppose that explains the evolution that has taken place, which I seemed to anticipate even in 2013. In any case, in the fall of 2016, I absolutely love La Folie.

This second review is based not just on the sample I had at the brewery. I enjoyed that sample enough to bring home a bottle, and I've been sipping it this evening. As it did three years ago, La Folie pours brown with very little foam. Whereas I only picked up on malt and cherry on the aroma in 2013, I notice other notes on the aroma now. The barrel aging process is conspicuous, and there are fruity notes apparent other than cherries. In fact, this year, the main secondary characteristic I notice in the smell is apples, apple cider, and brown sugar. This beer smells amazing.

The flavor, which was simply too heavy-handed for me three years ago, seems more nuanced and multi-faceted now. That big, aggressive sourness is still there. There's no getting around that, and if sourness isn't something you appreciate, you probably won't like this beer any more than I did when I first tired it. I guess my taste-buds have been dialed in more carefully, because along with that huge sourness I now also pick up on very strong woody and nutty notes on the flavor. There is also a crackery, dark bread quality in the background that's the best part of the exhale. This beer is layered so carefully. Sour is everywhere... if this beer were music, every note would be played in the key of sour. But there are so many more instruments here than I noticed the first time around. This beer is as dense as a symphony.

La Folie is still an uncompromising beer. If you already have a taste for sours, you will probably find much here to like. If you don't, this beer is just far too aggressive to pick up as your first taste of the style. Nonetheless, I'm glad I did find access to the style, and glad I tasted La Folie again. If I'm able to find it easily enough in my area, it is going to become a regular presence.