Wicked Weed's La Bonté Sour, the plum variant, pours hazy orange with a creamy head that fades to a rim ring. The aroma is rich, creamy, and tart. It might sound crazy, but the aroma reminds me a bit of Vermont cheddar cheese. Definitely one of the funkier beers I’ve had. The flavor is rich and malty on the front and then closes with sour bite and the wild, sense-expanding blast of a brettanomyces beer. Plum notes are present on the swallow and exhale. This is what I'd have called a sophisticated beer a few years ago, but I just call it damn tasty today. 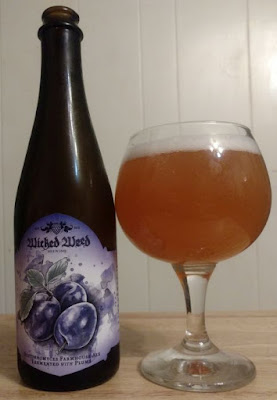 This bottle of Wicked Weed's Freak Of Nature Imperial IPA was brewed about two weeks before I drank it. I may have never had a fresher IPA. Wicked Weed says " Drinking this beer is like stuffing your face into a bag of fresh hops while eating a tangerine," and I guess my main quibble is I’d have said "lemon" rather than "tangerine." This beer pours bright, clear, pale orange with a very tenacious, creamy head. I get lemon zest and some spice on the aroma. More lemon on the flavor, with hops, hops, hops. Just a giant, dry, uncompromising bitter, hop bomb that is as good as anything from Portland or San Diego. 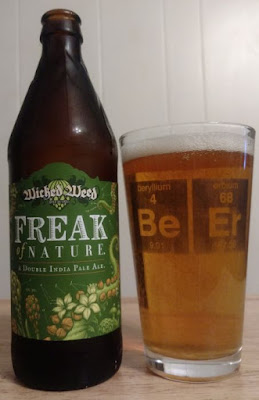 Wicked Weed's Tropicmost Gose pours hazy yellow with a thin head. The aroma is sweet and slightly tangy. The flavor is like a crisp wheat beer up front and then the tart, fruity qualities flood the finish and mix with the malt for something very refreshing and bright. I like this. 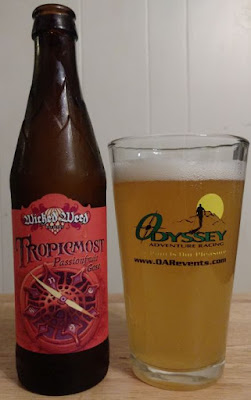 Wicked Weed's Pernicious IPA is a bright, dry, crisp IPA. It pours golden yellow, lots of carbonation and a big pile of foam. The aroma is a little tangy, lemon and grassy hops. The flavor is lemony and crisp and clean. It isn’t an earth-shaker, but it’s an easy-going companion with bar food and an overall fine IPA. 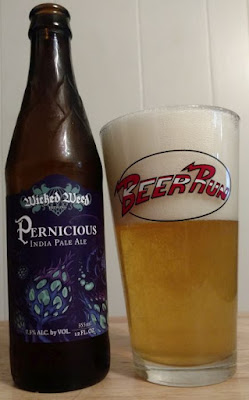 Barrel Aged Lunatic Belgian Ale is the weakest of the Wicked Weed brews in this batch. It's good. Not great. And there is no real hint of the barrel, to my taste. It pours hazy blond, average head, average carbonation. The aroma is typical Belgian, rich-smelling esters, bananas, cloves, etc. The flavor is pretty much the same. The finish is fuller than many Belgians, though, so it gets points for that. This beer has a big ol' ass for a Belgian single. 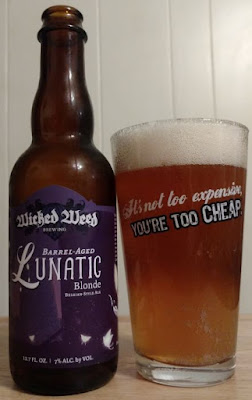 I intentionally separated the plum and pear versions of La Bonté by a matter of days so I could try to review them more objectively. I liked the pear variation a lot when I had it at the Funkatorium. From the bottle at home this beer is still very good, but I don’t quite enjoy it as much as I did on tap. And I think I actually like the plum version a little better. This beer pours haze orange with a fast fading head, the aroma is tart and yeasty, but not with quite that pronounced cheese kind of thing I noticed in the aroma of the plum version. I don’t really pick up on pears on the flavor, just that same super-funky, wild, strong brett sourness that makes the other variations so good. Really, all the variations of this beer that I've tasted have been damn fine. Wicked Weed has made sours very accessible to this stout/IPA fanboy. 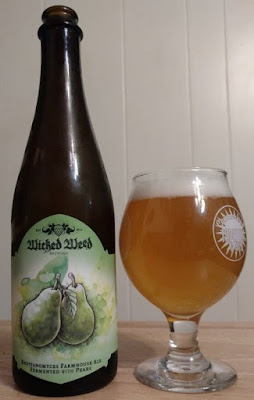