This mixed six review is made up almost entirely of beers from the North East. These are beers I'd not typically get a chance to try here in Virginia, but lucky me, I have a friend who hooks me up with these things. And, man, this shipment was killer.

Port Jeff Brewing's Orange Dream is one of the best Belgian Tripels I've had. It pours about the color of iced pekoe tea, with average head and carbonation. The aroma is what I expected from the name. It smells like a dreamsicle, sweet orange and vanilla and sugar. I'd have probably been happy with the flavor if it had been similar to the aroma. But the taste is surprising, rich, and even better than the smell. The typical Belgian tripel malts and yeasts are there, despite having not really been a presence in the aroma. On the tongue, the orange and vanilla is milder, more of a background quality, but still a presence. I'm more of a fan of dubels and quads than tripels... except for a handful, tripels often finish with a medicinal aftertaste that I don't like. No such problem here. Orange Dream was tasty to the last drop. 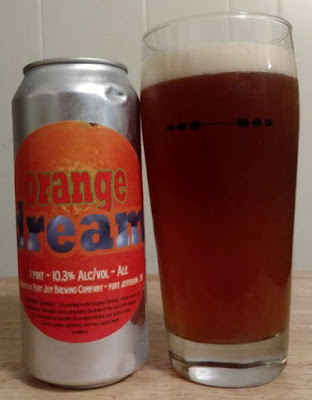 I've been hearing good things about Tree House Brewing out of Massachusetts for a while. The first beer I've been able to try is Green, a Tree House IPA. And this beer delivers on the hype. Green pours super cloudy yellow with a fair amount of head, the aroma is fantastic. Pineapple, herbal tea, a little bit of popcorn, something like Brussels sprouts going on there, too... it’s complex. The flavor is tangy, bitter, a little bit sweet. The citrus thing is the dominant quality, but the finish is a long, lingering floral hoppy note that resonates for several seconds. This beer is just fine. 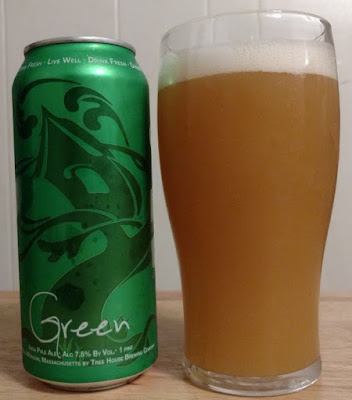 Captain's Daughter by Grey Sail Brewing is a very good, juicy double IPA with a fair amount of foam and average carbonation. The aroma is lemons, cracker malt, herbal hops. That’s the flavor, too, with a dry and clean finish. This isn't a particularly unique double IPA, but it's a classic example of why the style is so popular. Tasty stuff. 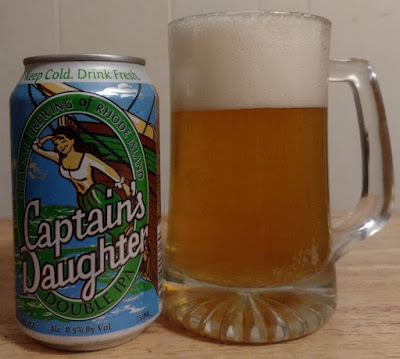 Afterimage is a Double IPA by Grimm Artisanal Ales, a Brooklyn Brewery. This beer pours cloudy tangerine orange with average head. The aroma is a sweet citrus blast, very much like pulpy orange juice, but the rich malt is there in the nose, too. The flavor is just extremely juicy citrus... grapefruit, lemon, clementines, etc. All of it good. Dry, bright, bitter finish. Dank as hell. Wonderful. 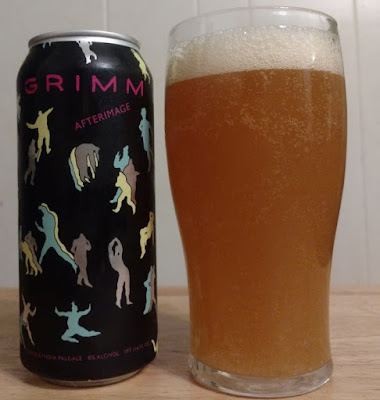 So, those four North East brews were all damn fine. But this one, here? This was the jewel of the five. Pile Of Crowns is a Double IPA by Long Island City Beer Project, and barring a miracle, this will be my IPA of the year for 2016. This beer is just super juicy, dank and bright with monstrous citrus and an almost vinegary bitter finish. Not vinegary as in acidic, but vinegary as in the sweet, pungent thing that you might associate with a citrus salad dressing. Salty, sweet, lemony, all good things. Pile Of Crrowns pours cloudy yellow with average head, and the aroma is mostly bright citrus. Nothing surprising for an East Coast IPA. It's the flavor that really brings the fun. And I think "fun" is the right word to sum up the taste, but the components include qualities such as starchy, crisp, a little piney, and slightly sideways. I absolutely adore this beer. I adore this beer so much that it makes me use words like "adore." 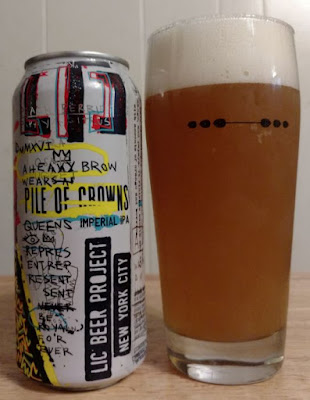 This year's variant on Stone's reliable Old Guardian Barley Wine is dry-hopped with Pekko hops. I like it. It's very smooth, very sweet... or, at least, sweater than I’d expected. Certainly not as hoppy as last year’s "extra hoppy" variant. In fact, to my palate, this thing isn’t even as hoppy as regular release Old Guardian. Maybe my palate is changing or maybe it’s even just a little off tonight. I don’t know. I do know that this beer is delicious, and smooth and rich, just not as hoppy as I had expected. It pours deep copper brown with a good bit of head. The aroma is like other Old Guardian brewings... caramel, honey, citrus, apples. The flavor is so rich and smooth, without the high ABV showing up much at all. Just the molasses and raisins and walnuts I expcted from Old Guardian. No complaints at all, although I can’t say that I detect anything special from the Pekko dry hopping. 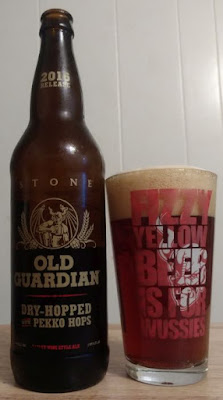