Sierra Nevada 11.5° Plato is one more session IPA. I guess it’s OK. This beer pours a slightly cloudy light orange with average head and carbonation. It doesn’t smell like much. It doesn’t taste like much. There’s a mildly hoppy back end and the finish hints at a bit of dry crackle. It isn’t bad, but session beers just aren’t my thing. I felt nothing while I was drinking this. Session IPAs are the rom-com's of beer. I have no idea who enjoys them. I just know it ain't me. 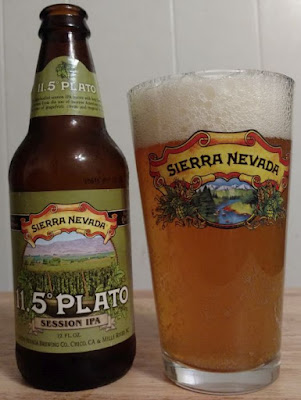 Flying Dog's Oaked Chipotle Ale is part of the brewery's Heat Series. I tried this out of curiosity, and I liked it a lot more than I expected to. It pours dark brown with very little foam. The aroma is sweeter than I thought it would be. There’s a hint of the oak and the pepper, but mostly it’s creamy caramel malt on the nose. The flavor brings the other stuff. The oak and some brown sugar up front, then the chipotle burns and tingles in the finish with a mildly acidic smokiness. I might even buy this again.

It's really, really hard to get pepper right in beer. Stone does a great job with Xocoveza, and South Street's wonderful pumpkin beer called Twisted Gourd are the only two beers with pepper that I really love. This one could be a grower, but it isn't quite a shower. 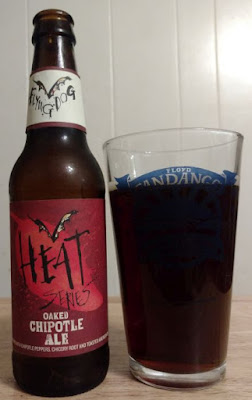 New Belgium's Lips Of Faith beers are the brewery's high-brow collaborations, but I haven't had one yet that I really love. Flowering Citrus is their colaboration with De Koninck, and this beer is a slow burner that I enjoyed more and more over the course of the glass. I enjoyed the last sip more than the first, which is pretty much what you want in a beer. It pours cloudy dark yellow with a good bit of fluffy white foam. The aroma is floral and a little tangy. Roses, lemons, some spice, a fairly complex bouquet. The flavor is really juicy up front, with lime the dominant presence. It’s clean and crisp, and a little bit dry in the finish. Refreshing. I liked this more than I expected to. 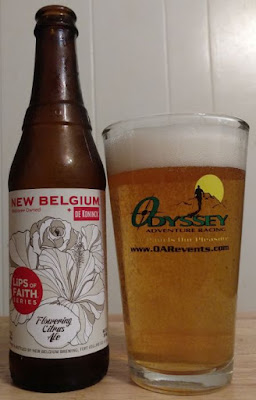 On the other hand, New Belgium's Lips Of Faith colab with Hof Ten Dormaal is very much only kinda OK. Simply called Golden Ale, this is a rich but very typical strong Belgian ale. It pours slightly hazy yellow with little head. Average carbonation. The aroma is like most Belgians, yeasty and fruity, bananas and malt. The flavor adds some grassy hop to that, and the finish is dry. My reaction was very much "Sure, alright, fine." 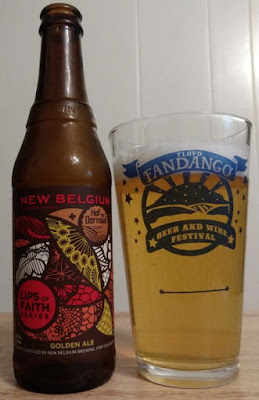 Stone has spent this, their twentieth year, bringing back some of their most beloved recipes. Not one of them has been a dud. I was very glad to see 2014’s limited release Unapologetic IPA back on the shelves. This batch, billed as Still Unapologetic, is like a giant West Coast middle finger to everyone who says that the New England style IPA has killed off the West Coast version. This beer pours clear gold color with average head and lace. The aroma is understated, as it was in 2014. In the nose there is some mild citrus, mild tropical fruit, a little malt, no big whoop. The flavor, like it was in the first release two years ago, is bigger. Still Unapologetic is dry and bright and bitter as hell. Notes of cantaloupe and grape and clean, grassy hops are punched up by a bright, dry, very bitter finish. The only thing disappointing about this bottle is that it eventually dripped dry. Stone has nothing to apologize for here.

I've made it no secret that I'm totally Stone Brewing's boy. Beers like Arrogant Bastard, Enjoy By, Ruination, Xocoveza, and Thunderstruck are among my favorite beers of all time. Then again, I made it no secret that I thought the last three years were a bit lackluster for my favorite brewery. Recent news has indicated that this hasn't been Stone's best year, financially. But I'm here to say, unequivocally, that at least in terms of taste, this has been Stone's strongest year in ages. These twentieth anniversary re-releases have just been ringer after ringer. It would take a miracle for any brewery to top Stone as my pick for Brewery of the year in 2016. 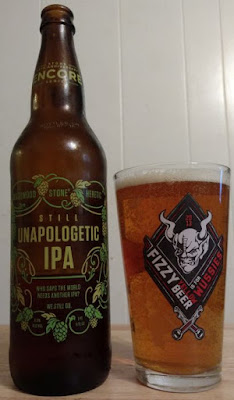 I've had some of Stone's Enjoy By variants on tap, but rarely pick up a bottle and rarely feel like I've tasted the variants enough to review them. But I sipped a sample of Stone's tangerine version of Enjoy By recently, and liked it enough on tap to get a bottle. This variant is not better than regular Enjoy By, abd maybe it's not even quite as good, but still a delicious imperial IPA.

Enjoy By Tangerine pours clear, light orange color with an awful lot of head. The aroma is pretty much exactly like regular Enjoy By... notes of grapefruit and floral hops. The flavor is comparable to regular Enjoy By, too, but the tangerine is a slight presence on the back end. I love that Stone doesn’t make ancillary ingredients the dominant character when they do a variant of a favorite recipe. My only complaint is that I expected something juicer, here. Something bigger and danker and a little less lean. This beer is subdued by Stone imperial IPA standards. Yeah, it’s good. It’s not mind-blowing like the Enjoy By series can be from time to time (Long live 12-25-15), but it’s still very good. 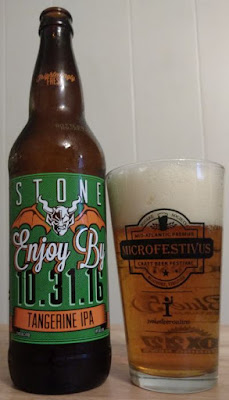