MY TWENTY-SECOND RACE, THE PEAK TO CREEK MARATHON

When I first started getting active and trying to lose weight in August of 2014, I started writing about it at the blog. I also wrote a long blog post about my first race, a 5K in Charlottesville, in June of 2015. Looking back at how I ranted for paragraph after paragraph about a simple 5K is kind of humbling now. At the time I'd come a long way, but I'd have probably guessed in June of 2015 that 5Ks were about as far as I'd go with running.

When I ran my first half marathon in January of this year I wrote another long blog post. That one is particularly embarrassing for me now, because I look at the purple prose and the attempts at allegory and realize that, once again, I was sure I'd accomplished as much as I ever would. I'm leaving both of those blog posts up because that's all part of the process. Hitting milestones, feeling a sense of accomplishment, working for the next milestone, and looking back at where you were with mixed feelings. That seems to be what distance running is about.

I spent this past summer training for my first marathon, which was yesterday. I posted a long, rambling blog entry about marathon training the other day. That's probably sufficient as far as reflection and contemplation. Now that I've actually finished the marathon I feel like writing something more immediate. These are the things going through my head the day after finishing a marathon. Maybe looking back at a list of bullet points, recorded before selective memory re-frames the race, might be useful as I prepare for my next distance-running project. So, that's all this is. A highlights reel. A list of the things I am feeling right now, one day after completing a marathon. 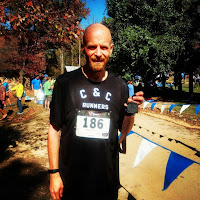 I finished the race in four hours, six minutes, forty-seven seconds. Not awful for a first time marathoner who started running in his mid-forties. The guys I've talked to in my running club encouraged me. They said that 4:06:47 is completely acceptable, but that it is entirely feasible that I can hit my goal of less than four hours in my next couple of marathons.

Right now, I hurt all over. And my feet in particular hurt like a sonofabitch. I've had aches and pains after long runs before, and my first few twenty-mile training runs left me achy for a while. But I've never had this kind of all-over, ongoing-trainwreck kind of pain. I've never seen my feet this swollen in my life. I'm beginning to wonder if they're going to just stay swollen forever.

The ride home from North Carolina today was difficult. If I sit still for very long my body kind of seizes up, and then when I stand up it seems to take a long time to be able to walk again. On the ride home I stopped and got out of the car every 45 minutes or so, just to walk around a little bit, mostly because I was afraid that if I actually sat for 90 minutes at a time I'd never be able to stand up again.

After the race a lot of other runners were using foam and plastic rollers and doing specific stretches. I talked to some of them and got some good tips. One veteran runner told me that he'd never used rollers until recently. He said he'd stretched and walked and tried to do a few things, but in thirty some years of running he'd never bothered with the rollers. That is, until a few years ago when he'd finished a marathon with a knot in his thigh that was so painful he could hardly walk. He said one of the post-race sports-medicine techs had worked on his leg with a roller, and that although it had hurt like hell, the short-term and long-term relief had done wonders. He said he'd gotten a roller immediately after and that he swore by them. Now that I'm still in a lot of pain more than twenty-four hours later, he has me convinced that I need to get a roller and learn to use it.

After having run exactly one marathon, here's how I'd sum it up. The last six miles of the race, that is the marathon. That is the endurance contest. Everything that leads up to that is just a twenty mile fun-run. I did fairly well in those first twenty miles, too. I sailed past the 13.1 mile half-marathon mark about four and a half minutes better than my PR for that distance. I was in pain by the fifteenth mile, but managing it pretty well, and proud to be doing it. It started getting bad after that. At nineteen miles I felt my body starting to go wonky. I was slowing down and feeling sick and clearly at the wall. I got half a banana and some Gatorade at the next aid station, and that helped. But it didn't last long. By the twenty-second mile, I was all to hell. Miles twenty-two through twenty-five were damn near unbearable. Everything just seemed to go all to hell on me. I was running some, walking some, stumbling, heaving, trying not to puke, trying not to crap my pants. I was dizzy, my legs felt like they were on fire, my head pounded and my sides hurt. I was playing all kinds of mind-games with myself, too... telling myself that I could quit at the next aid station, that I'd done more than anyone would have ever thought I could, etc. I mean, damn, man... mile twenty-two through mile twenty-five was just miserable. At mile twenty-five I realized that I was only 1.2 miles away from actually finishing my first marathon, and I made myself buckle down, suck it up, and run. The last mile is a blur.

After I crossed the finish line I did what it seemed like most of the other runners were doing. I found a shady spot under an unclaimed tree and collapsed. I just laid there for a long time feeling different things going on in my body. Pain moving up through my legs, into my back. The headache fading and coming back and fading again. Nausea and thirst and hunger alternating in waves. After maybe ten minutes it all started settling down. An EMT was moving through the finished runners on the ground, asking each of us if we were OK, and moving on. Everyone told him the same thing, I'm fine, just exhausted, need a few minutes, etc.

And after fifteen minutes of laying there I was able to get up, and I basically felt OK. I was in a lot of pain, I was stiff, but my gut was normalizing and my headache was going away. I went and got something to eat, milled around and chatted for an hour or so, learned about the foam rollers I mentioned above, and then headed to my room to shower and rest a bit.

That shower, by the way... good God. You know how, in movies, we sometimes see the survivor of a difficult experience finally relaxing and letting the pain melt away in the shower? I can't think of a specific film, but I know I've seen it before; bone-tired athletes or warriors finding relief and repose under a stream of hot water. Well, that's bullshit. The shower after my marathon hurt like you wouldn't believe. It was like the water was finding, magnifying, and doubling the pain in every chaffed patch of skin, every throbbing muscle, every burning joint. After a couple of minutes I mercifully became kind of numb and I was able to wash myself, dry off, and collapse again onto the bed in my hotel room.

So, the take aways are: Be prepared for the agony of the last six miles and just know that I can get through it because I have gotten through it once. Get a foam roller and learn how to use it. Study proper fueling and make sure I'm doing it right, the head-ache is probably blood sugar related. Monitor the swelling in my feet for a few days and see if that's going to get better. And go on from here. I don't know exactly what the future holds at this point, I don't know if I'll do an ultra one day or just stick to occasional marathons, or what. I don't know what's next. But I know that something is next. I did not run this far to just stand here.