MARATHON TRAINING... SOME REFLECTION BEFORE THE RACE

This Saturday, October 29, 2016, I will run my first marathon. I'll be competing in the Peek To Creek Marathon, over 26.2 beautiful miles of road from Jonas Ridge to Brown Mountain Beach Resort in Caldwell County, North Carolina. I've been training for this marathon since June 27th, and I decided to crunch the numbers from my MapMyRun account and see how much training this program has actually entailed. 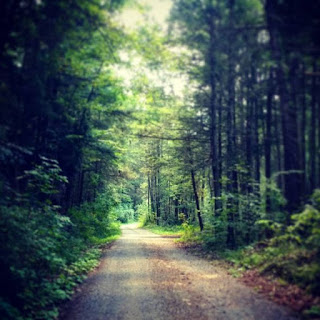 Rounding down to the nearest mile, I've run about 710 miles over the course of this training program. I've been doing a variation of Hal Higdon's Intermedate 2 Training Program for marathon runners. I've customized the program to allow for the fact that I'm a shift worker. More often than not, my days off are during the week rather than on weekends, and I haven't been able to keep the long runs relegated to Saturdays or Sundays. For a shift worker, you train when you can, how you can, and sometimes where you can.

I also read Higdon's book about marathon training, and tried to take a lot of it to heart. In one chapter, Higdon discusses and largely dismisses the idea of over-training. He said that the vast majority of marathon runners feel at the end of their marathon that they ran just the right amount of training miles, and many feel that they didn't run enough during training. However, Higdon said that very, very few runners go into the race feeling over-trained. Higdon did emphasize the importance of doing the "taper" correctly... the taper being the last three weeks of training before the marathon when runners run less and rest more and prepare to go into the race feeling recharged and energized. Since I've been tapering I've followed the plan religiously. But during the intense months I felt free to up my mileage. Toward that end, instead of running the prescribed three 20-miles training runs, I doubled the number of 20-milers to six. And I extended other runs to go a little longer fairly commonly.

Over the course of my training I've burned about 130,000 calories. The largest cluster of those burned calories and logged miles took place in September, the most intense month of the training. I've also worn through three pairs of running shoes, eaten enumerable energy gels, drank (this number is a guess) a couple hundred gallons of water, and gone through two sets of knee braces. I've never put this much focus, this much expense, or this much sheer physical effort into training for anything. These last four months have been the most demanding and painful of my life. This has also been, without question and beyond compare, the most rewarding experience I've had. I know myself better now than I did at the end of June. I know more about running, about sacrifice, and about how to reach down and find something extra when I feel like I can't possibly have anything left.

I went into this training program unsure if I'd ever be able to do one of the twenty mile training runs. After having covered that distance six times, with each time a little easier than the last, I now know that I can cover the distance fairly well if I go into it prepared. I've learned about terrain, having run through city streets, over gravel roads, through hiking trails, up hills and down mountains. I've fallen, rolled, slipped, skidded, and wiped out. I've sweat, bled, spat, cried, laughed, and puked. I've learned how my body responds to asking more of it than I ever had before. I also know more about how to judge my speed, my pace, and my energy. I know what an eight minute mile feels like, I know what a nine minute mile feels like, and I know how to shift gears and go from one to the other when I need to. I know when an ache indicates that I'm reaching a new level, and I know when an ache indicates that I need to stop for the day. And I know the feeling of bone-deep exhaustion that comes from a long day of running in a mixed bag of wind, rain, oppressive heat, and early morning darkness. It's a wonderful feeling. It's a feeling of self-awareness. I know my limits, I know my abilities, and I've never felt so calm about both of those things.

Training for this marathon has caused me to have days when I hurt all day long. It's caused me to miss events and change plans. It's been a distraction and an obsession. It has also been the most productive and strongest four month period I've had. I am coming out of this training program not only feeling ready for the race, but ready for the rest of my life.

I don't know how I'm going to feel after the race on Saturday, but I'm going into it feeling happier and a little stronger than I was four months ago. On Saturday I will do just what I have done over the last 710 miles. I'll step up to the line, try to run smart, try to run hard, and finish confident that I left everything on the road.

(Update: Here are the notes that I wrote after actually finishing the marathon.)