I've previously only had Catoctyn Creek's Roundstone Rye at restaurants and bars, this is the first time I've bought a bottle. That's partly because it's hard to track down, you have to special order it at most ABC stores in Virginia. But it's also because of the price. Roundstone is significantly more expensive than my go-to rye, Templeton. Nonetheless, Roundstone is a favorite way to finish a meal, when it's available, and I've always been happy on the rare occasions that I can find it by the glass. I finally picked up a bottle yesterday, and after really comparing and contrasting, I have to say that Catoctyn Creek's rye whiskey is absolutely outstanding, but will not edge out Templeton as my preferred rye.

Roundstone Rye pours only slightly lighter in color than Templeton. The main distinction between this and other ryes is the aroma. Put simply, Roundstone Rye is the best smelling whiskey I've ever had. I could just sit and smell a glass of this stuff for ages. And what makes it so wonderful to smell is that it isn't very balanced at all. Roundstone leans to the sweet side in the aroma, in a strong and wonderful way. Every wiff conjures up something new, and all of it sweet... caramel and butterscotch are dominant, but there are also notes like pancakes, candied nuts, vanilla, sweet potatoes, and gingerbread. This whiskey smells incredible, and this is coming from someone who doesn't really go for sweets. But I go for this.

The flavor is also surprising, and not what I'd expected from that huge aroma. The first time I had this I expected the flavor to just be off-the-charts sweet after taking in that aroma. It isn't at all, and that's what makes it so enjoyable. Roundstone is mild and goes down very clean, almost like an Irish whiskey more than a rye. To my untrained palate, this whiskey is very subtle in flavor. The spice and rich malt I've come to expect from rye whiskey are there, and so are the sweet notes. But it is all dialed back noticeably. This is like a cross between Templeton and Tullamore Dew... lighter on the tongue, and far less aggressive than some ryes, such as Russell's Reserve and Bulleit.

I don't know that Catoctyn Creek's Roundstone Rye is ever going to become a regular purchase for me. The difference in dollars between this and Templeton is prohibitive. But there's no denying how good this is, and there is no forgetting the incredible aroma. 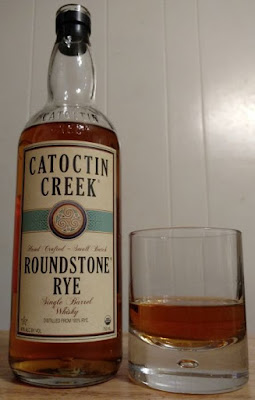