In short, Stone started out with a great beer, aged it expensively in premium barrels, and ended up with still a great beer. It isn't transcendent. It doesn't change everything, and at even the most affordable price I've seen it, that is a disappointment.

Like regular Double Bastard, this beer pours brown with very little head. The aroma is all the stuff from regular Double Bastard... caramel, apples, brown sugar, spice. That’s all in the flavor, plus the boozy blast of Double Bastard is compounded here (because the ABV is elevated to 12.7%). Where I really notice the Templeton barrel aging is in the aftertaste. On the aftertaste the distinct, spicy, sweet, oaky, buttery quality of Templeton is a real, undeniable presence. I did notice it. But I already have a bottle of Templeton, and that bottle tastes exactly like Templeton.

One more note about the price, which I cannot help fixating on. This beer was thirty bucks in my area last year. Thirty damn bucks. I'd never have bought it at all if the taproom hadn't had it at a much more reasonable price. And this is not even for a twenty-two ounce bottle. This bottle stands as tall as the double-deuces, but it has that big dimple in the bottom of the bottle that makes appearances deceiving. This is a 500 ml bottle, not much more than a pint. Stone is milking their loyal fanbase with releases like this. 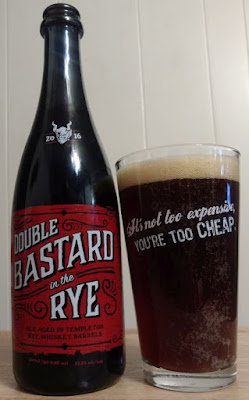 I was glad to get a chance to try the re-release of Stone's 15th Anniversary IPA at Stone’s taproom in Richmond, and I was curious to see if I’d find it to be different from Sublimely Self Righteous, the regular release version of this recipe. Maybe some of it was in my head, but I thought this beer was quite different from SSR. I liked it enough to bring home a crowler, and that’s what I’m reviewing, here.

This beer still pours brown with a thick, tan head and average carbonation. The aroma is still hop-forward, of course. Pine and grassy notes, but I didn’t really think I picked up on the rye-like notes that I notice in SSR. The taste is where I really detected a difference. There is a rush of chocolate and coffee on the finish that I just do not get out of SSR, and it’s delicious. Really wonderful. Hops in the nose, hops on the front of the tongue, and then sweet, rich smoothness at the end. As much as I love Sublimely, I do like this more. I’d buy this often if I could. I'm glad that Stone balances mild disappointments like the beer reviewed above with surprising beer like this one. 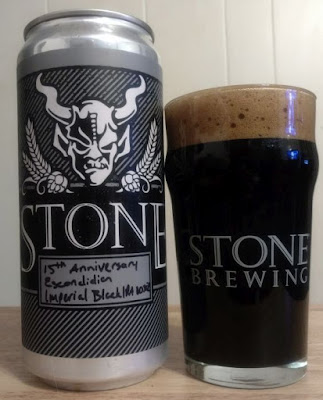 I haven’t been wild about maple beers, but Saucony Creek's Maple Mistress, a pumpkin beer with maple, is very well reviewed. And it deserves to be, it's very good. To my taste, it's really nothing like a pumpkin ale. It pours hazel/brown with a head that fades to a tan ring quickly. The aroma is really nice. Warm spice, some brown sugar, some of the maple. The maple comes through on the flavor bigtime in the finish, but it doesn’t get old. The rum spices and rich malt are nice, too. There is a lot going on here, and pumpkin is the least of it. This beer is very good. 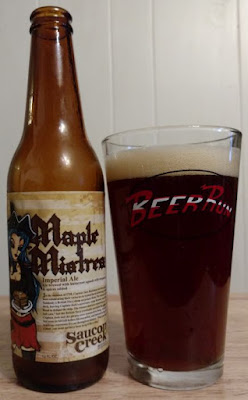 As billed, Roy Pitz Daddy Fat Sacks IPA is a balanced and malty IPA that finishes slightly sweet. That isn’t really my kind of thing as far as a regular IPA choice, I mostly tried this out of curiosity. I'd rate it well for delivering on it’s promise. This beer pours slightly cloudy yellow with a huge head. The aroma is like an English bitter, with some lemon citrus and yeasty notes. The flavor is smooth and understated, and finishes emphasizing the mellow malt. 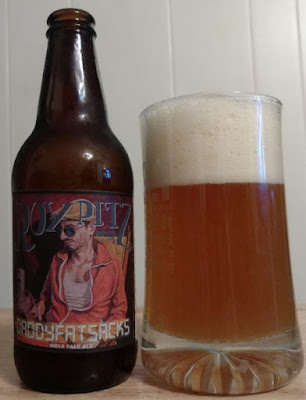 I’m a litle late getting Ninkasi's Maiden The Shade Summer IPA, but the beer in this bottle was good, regardless of it’s age. It pours cloudy orange with average head and carbonation. The aroma is grapefruiit/citrus and slightly sweet malt notes. The flavor hits hard with that citrus. Grapefruit, and then a lemon meringue, sweet finish. I liked this beer. 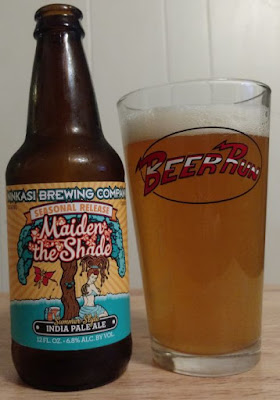 The ginger version of Ballast Point's Big Eye IPA is okay, but I don’t enjoy it as much as the regular release. It pours cloudy orange, there is a good deal of foam. The ginger is strong on the aroma, but the fairly juicy, strong IPA aroma of regular Big Eye is still there. The Ginger is front and center on the flavor, too, although the hops aren’t completely drowned out in the finish. I was a little tired of the ginger by the end of the 22 ounce bottle. 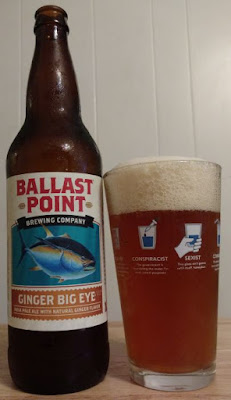