It's Labor Day, so I guess it's time to start talking about autumn beer.

And, already with the pumpkin beers all over the damn shelves. I make myself review one every fall, whether I want to or not, and decided to take the hit early this year. Sometimes it works out in my favor. In fact, I can think of one pumpkin beer that I actually love.

I heard good mumblings about Southern Tier's Warlock Imperial Pumpkin Stout last year and decided to go ahead and try this year's release. What I found was a pumpkin spiced imperial stout with enough strong, rich, bitter malt to stand up to the pumpkin spice. I was pleasantly surprised. Warlock pours black with a creamy head. The aroma is rich and bready, and does have the typical pumpkin/cinnamon/nutmeg qualities of a pumpkin ale. But it works here. I don't say that very often, but I'm saying it here: the pumpkin spice adds to this beer rather than covering up or distracting from a baseline brew. This beer's flavor is like washing down a slice of pumpkin pie with a dark chocolate latte. The finish adds some vanilla and some nuttiness. I cannot deny that I liked this. I'm going to buy it again, on purpose. 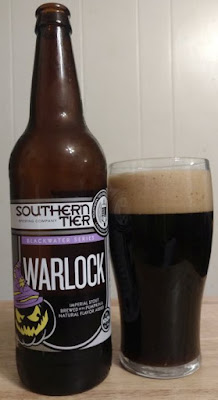 Had another brewery released Evil Twin's No Hero Oatmeal Stout, I’d probably be heaping praise on it. But I find it impossible to drink this very good stout without the context of Evil Twin’s assortment of superior stouts framing my opinion. Compared to Even More Jesus and Imperial Biscotti Break, No Hero is only OK. It pours black with a little bit of tan head. The aroma is coffee and chocolate and roasted oatmeal malt, as expected. But only as expected, a qualifier I rarely use for Evil Twin stouts.

The really rich, almost sweet oatmeal malt is so dominant on the finish that it almost castrates the stronger qualities. Somewhat thin mouthfeel, at least when compared to those superior Evil Twin stouts I mentioned before. Don’t get me wrong, this is a damn fine beer. But it’s not at the top of my list of Evil Twin stouts. EMJ and IBB are explosive beers. This one is only a very good beer. Evil Twin has made me change my plans before, out of fear that I would miss out on an opportunity to purchase their releases. This particular beer will not make me change my plans. I don't know if it could have been better named. 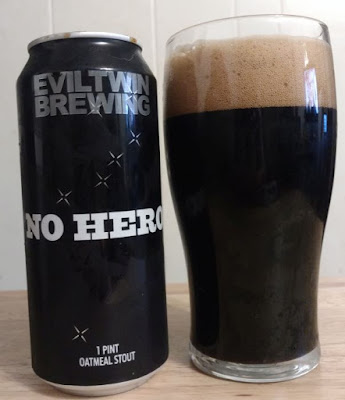 I don’t know what makes Deschutes Hopzeit an "autumn" IPA, but it’s a decent beer. Hopzeit pours dark gold color with a lot of foam. The aroma is mild. Slight pine hops notes, but nothing much for the nose. The flavor is bigger and far better than the aroma suggested. Mild malt with a fairly bitter, bright hop punch in the finish. Went down easy, which is no complaint. 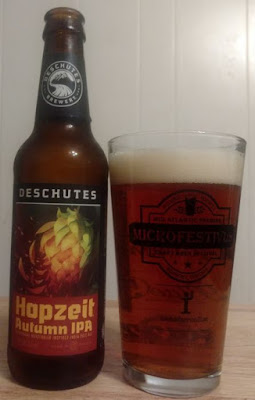 The 2016 version of Sierra Nevada’s collaborative Oktoberfest offering isn’t as smooth or as rich as last year’s version, although it’s still very good. I’m told that what I’m missing here are the sweet and fruity notes that many American breweries bring to the style, and that this version (brewed with Germany’s Mahrs Brau) is more authentically German. Maybe so. It’s definitely still a good beer. It pours hazy yellow with a fair amount of head, and the aroma is lemon, cracker malt, and a background of mild spice. The flavor adds a dry, tight finish. It isn’t bad at all, but I’m not surprised at how much I enjoy it, the way I was last year. 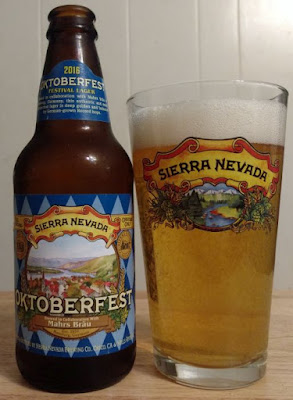 So, this is a sweet stout, a style that has inspired nothing but "meh" from me. It's called Quick Start My Heart, which is an awful name. And DuClaw bills it as a Strawberry Milk Stout. I bought this beer mostly out of curiosity, sorta expecting it to be awful, and it is not awful. It isn't very good, but it's not awful. It's OK. 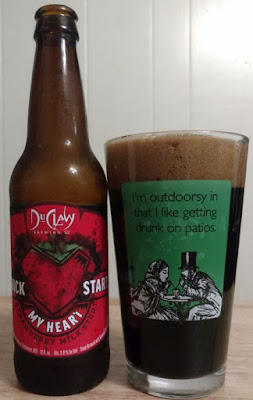 Starr Hill's Last Leaf is a brown ale with maple. It pours a deep copper with a quickly fading head. The aroma is a little bit of buttery malt and some grassy hops, and distinct maple. The flavor is warm up front, with a little spice, but it closes with too much maple for my taste. When maple is done right in a beer, you're not even sure you're tasting it. It's just part of the oeuvre. (See Dogfish Head's 75 Minute IPA, the best maple beer I've had, and the best DFH beer I've ever tasted.) I was tired of the maple in Last Leaf by the time I finished the bottle. 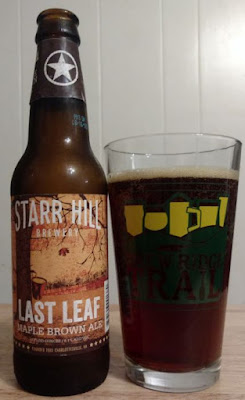