I review whiskey infrequently because I drink whiskey infrequently, and I think every whiskey review I've posted at the blog has primarily been made up of those qualifiers. The only thing I really know anything about is beer. Beer is the only beverage I really even crave. I know less about wine than I do whiskey, but I find whiskey to be far more intimidating and infinitely more nuanced than anything else I enjoy. All I can do here is post my opinion, which is all anyone does with a review. I know that. I also know that inexperienced reviews are sometimes the most useful to fellow newbies. So, there are all my qualifiers. Make of this review what you will.

I don't like Buffalo Trace as much as Maker's Mark, which will probably always be my go-to bourbon. I'm inherently conservative, especially with regard to liquor, both because of it's potency and it's price. Maker's Mark hits the spot for me, and it's a spot I feel the need to hit only occasionally. Having said that, Buffalo Trace does taste good, and at least in my area it's significantly less expensive than Maker's Mark. So those are definitely factors.

This tastes far better than the stuff I think of as frat house whiskey, Jim Beam and Jack Daniels and the like. Buffalo Trace pours a bright amber color, and the aroma is slightly sweet malt and oak notes, as I'd expected. The flavor up front is sweet, with vanilla notes and mild spice that linger through the finish. The finish is where this stuff doesn't quite live up to Maker's Mark. In fact, the close is far closer to the mid-shelf Beam/Daniels alternatives. It's a little minty, like mouthwash, at the end. Not quite medicinal, but neither as smooth, nor as complex as Maker's. What can I say, that's my standard for bourbon. Until it's exceeded, that's the standard other bourbons will have to meet.

I'm glad I tried Buffalo Trace, and the bottle won't sit around neglected in my freezer. But next time I crave that rare bottle of bourbon, I'll probably go back to my old standby. 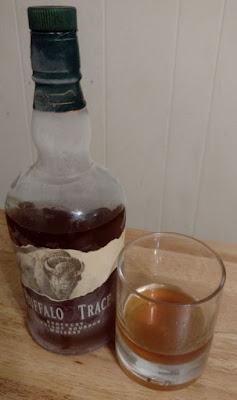