I think Evil Twin must have a corporate policy that three out of every four of their beers has to have an in-joke as a name. That's bound to be the case with Ryan And The Beaster Bunny, a saison that pours cloudy yellow with a lot of foam that fades to nothing quickly. The aroma is grassy hops, lemon, spice, egg malt, bread grains and cream. The flavor has those notes, with a dry, tight finish. Not bad. 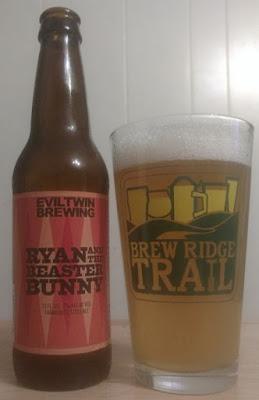 Evil Twin's Wet Dream is a complex brown ale with a lot going on. I had it on tap, and thoroughly enjoyed it. Throughout the glass, new notes continued showing up on the nose and the tongue, and I never quite felt like I’d totally figured this beer out. It pours copper/brown with average head and average carbonation. The aroma combines honey, coffee, citrus, mint, a little bit of nutmeg... and the flavor is at turns sweet, rich, and sometimes bitter. A little bit of boozy vapor and coffee comes through in the finish. Really nice beer. 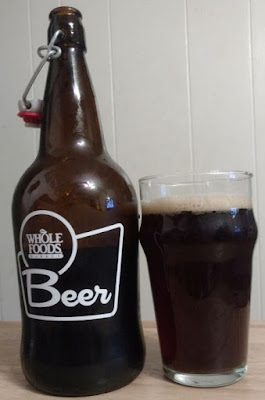 Retro IPA is mild, with a downplayed hop profile and not a lot to recommend it. But if you’re just getting interested in the style, or not a fan of huge hop-bombs, this might be for you. It pours a medium yellow with a fair amount of foam. The aroma is a mild cereal malt and a little bit of floral/grassy hops. The flavor is the same, with a slight lemon zest tone on the finish. Not awful. Not Evil Twin's best, either. Not by a long shot. 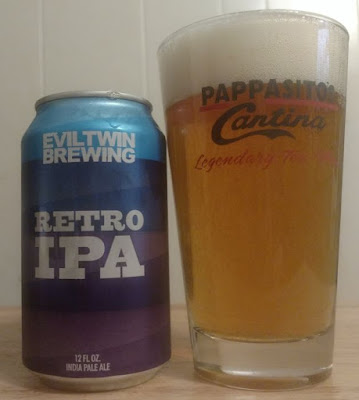 Even More Jesus is an imperial Russian stout, and I love it with all my heart. It is so good. It’s soooo good. And now that it’s out in sixteen ounce cans, EMJ is just about perfect. This imperial pours jet black from the can with a huge mountain of chocolate cream brown head. The aroma is very rich, strong, bitter baker’s chocolate and a little coffee. The flavor is huge on that rich, bitter, very strong roasted malt/chocolate thing. Relentlessly so. Coffee, a little herb kick, and a strong, bitter roasted finish. The big ABV is only a ghost on the aftertaste. Ranks with Ten Fidy and Undead Party Crasher and my other favorite imperial stouts. In four-packs of sixteen ounce cans, it's available in my area at a great price. I doubt I'll see a more attractive beer package this year. 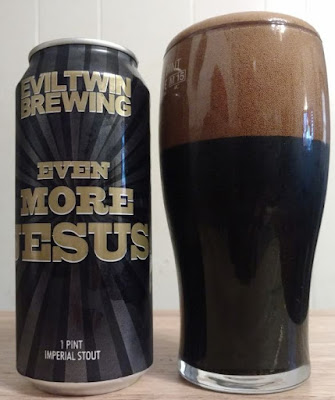 Aun Mas A Jesus is, I suppose, an Evil Twin variant of Even More Jesus... but, if I'm honest, I have to admit that I don't know which recipe came first. This beer is not as good as Even More Jesus, but it is still outstanding. It pours completely black with no foam, and the aroma is bitter chocolate, chicory, coffee, burnt malts. The flavor is the same, but a little muted compared to EMJ. A little alcohol on the finish. 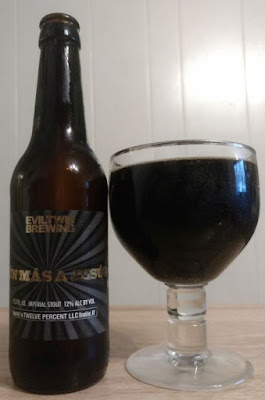 I Love You With My Stout is, for sure, an EMJ variant. It says so on the label. This one is leaner, with a lot more boozy/alcohol character and not as much complexity. ILYWMS pours black with average head, the aroma is anise, very bitter, burnt roasted malt, some alcohol. Malty up front on the tongue, but the finish has enough strong alcohol character to almost be medicinal, at least in comparison to the far better EMJ. 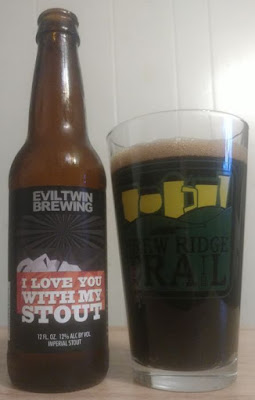 Stone's Citrusy Wit is is that rare Stone brew that I don’t enjoy at all. It pours cloudy, dark yellow with a lot of foam. The aroma is strong citrus, grapefruit and lemon, etc, with a little bit of banana/yeast Belgian quality. The flavor is dry, with heavy citrus zest notes that just don’t work for me. It’s artificial tasting, and the finish is just off. 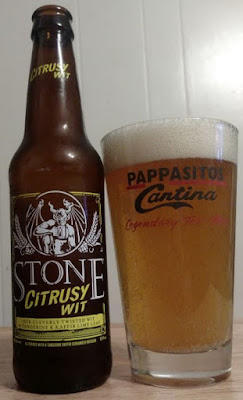 Clown Shoes Rexx is an American Strong Ale aged in bourbon barrels. This beer is a dark, cloudy brown, lighter around the edges, with an average amount of creamy head. The bourbon barrel aging comes through strong on the aroma. Vanilla, some spice, apples, brown sugar, crackers, caramel... it smells really good. The flavor is rich and smooth and a little sweet. Really rich, bourbon/vanilla comes through strong on the finish. Dense, chewy mouthfeel. This is exactly my kind of thing. Strong, rich, uncompromising. It plays the bourbon barrel card all up in your face with no apologies. 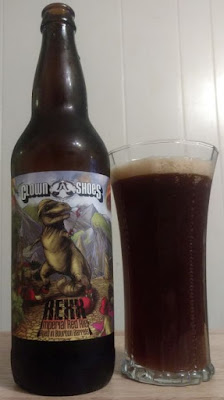 Apocalypse Ale Works Heavy Red Horseman is a wee heavy style Scotish ale. It's not the best thing I’ve had from Apocalypse, but it isn’t horrible. It pours copper color with a quickly fading head. The aroma is caramel, walnuts, a little spice and ginger, and the flavor also has a molasses quality. Very malty, but mild. No, mild isn't really the word. Limp is the word. This beer is limp. 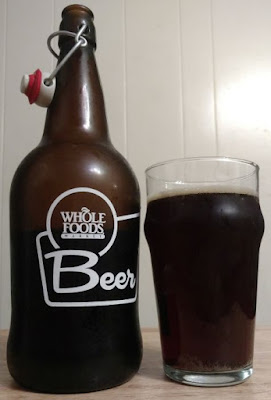 I should have tried Apocalypse Ale Work's Winter Snack Stout when it came out at the end of last year, but to be honest, I was turned off by the name. The word "snack" makes the beer sound like a crowd pleaser, something insubstantial. When I visited the taproom recently I saw that they still had some bombers, and the label says this beer comes in at 10.1% ABV rather than the 7.6% listed at RateBeer. I figured a ten-percenter could stand up to some aging, so I picked up a bottle. I'm glad I did. This beer tastes pretty darn good. It pours dark brown with average foam that fades eventually. The aroma is sweet, rich, slightly fruity and malty. Coffee and carrot cake qualities. The flavor delivers the rich oatmeal malt, chocolate, and sweet citrus. Chewy, substantial mouth-feel. I really liked this. I wish I’d tried it sooner so I could have picked up a few more bottles. 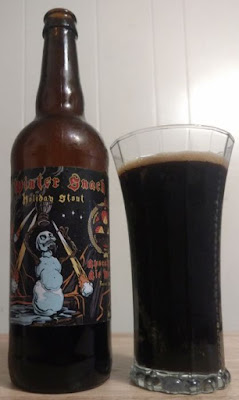 Godamighty, now, this is a beer. Avery Brewing never lets me down when it comes to these gigantic, barrel aged malt-monsters. Tweak is a barrel aged imperial stout that boasts a ridiculous ABV, north of 17.5%. This beer pours jet black with a quickly fading and very minimal head. The aroma is really big and rich. Coffee, chocolate, dark liquor, candied fruit, vanilla, creamy caramel, the kind of sweet/rich complexity I expected from the brewery behind the humongous Mephistopheles stout. Although the ABV here is slightly higher than Mephistopheles, alcohol is not an overpowering presence on the tongue. Yeah, it's there. You're gonna taste the alcohol at this level, and this beer is boozy, for sure. But coffee and a chocolate/caramel nut-cream sweet richness are the main notes on the tongue. Wow. I hope I can find a couple more bottles of this. Avery Brewingn consistently delivers. I wish everything in life were as reliable as this brewery. 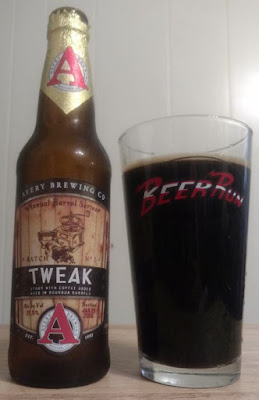 Ninkasi's Vanilla Oatis stout is decent, if maybe a little underwhelming. Pours very dark brown, no real head. The aroma is bitter baker’s chocolate, but it’s very restrained. The flavor is restrained, too. I don’t pick up on the usual rich, cereal malt thing that I enjoy about oatmeal stouts. The front of the tongue is watery, but the finish is a little better. A little bitter, roasted malt, and just the slightest hint of vanilla show up on the back end. 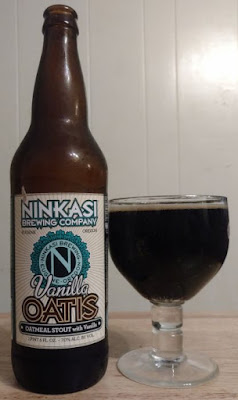