AleSmith's Nut Brown English Style Ale is very good beer. It pours dark brown with copper highlights. Caramel and walnuts on the aroma. Rich, dense bready malt flavor with honey and caramel notes. This beer is one of those beers that makes me second-guess my tendency to always seek out new beers to try. I mean, this beer is really good. It would probably reward repeated samplings. But I'll probably not have it again, I'll probably pass it up in favor of trying something new. And that's a shame. 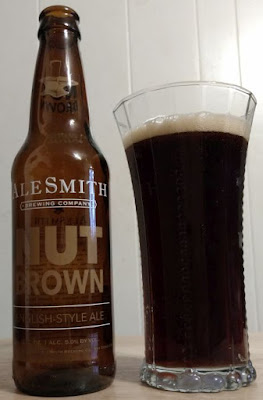 Ballast Point's Watermelon Dorado Double IPA just doesn’t work. the original Dorado is a great double IPA, but the addition of "watermelon" adds an artificial, sugary candy overtone that just about ruins it. Like the original, this beer pours clear, bright amber with a lot of carbonation and foam. The aroma is like Dorado, lots of hops and malt, too... but with the addition of strong, watermelon flavored Jolly Ranchers. Yuck. Not what good beer should smell like. Not what good beer should taste like, either. The classic, bitter Dorado character is ruined by that synthetic, artificially flavored watermelon gum or candy thing. No, no, no sir, no. Hell no. 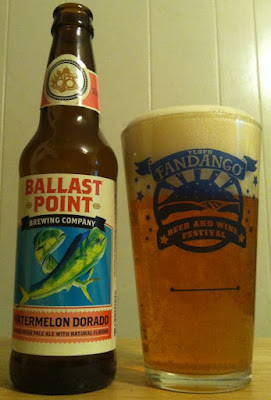 Green Flash does ancilary flavors well. For instance, Dia De Los Serranos Imperial Stout. This peppered stout pours black, the head quickly fades to an almost nonexistent rim ring. The aroma is much milder than I expected. The roasted malt is there, and a slight sweetness. No peppers on the nose. The peppers and spice are there on the flavor, but they don’t become dominant until toward the end of the bottle. It’s a slow burn. Mostly, up front, there’s the malt, some coffee and chocolate. After several drinks, the peppers move to the front... but it doesn't become the primary flavor until near the end. 22 ounces is plenty, but I enjoyed the whole bottle. 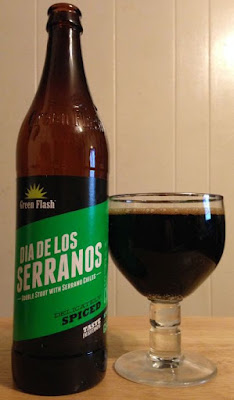 Sixpoint is a brewery that rarely disappoints me, but nobody is perfect. C.R.E.A.M. is a cream ale brewed with coffee, or so the label says. I guess it's not bad, but it’s nothing special. C.R.E.A.M. pours a bright copper color with a lot of foam. The aroma is mild, musty malt and some grassy hop presence. The flavor is your standard cream ale, kind of rich, slightly sweet at the end. I don’t detect anything life coffee. 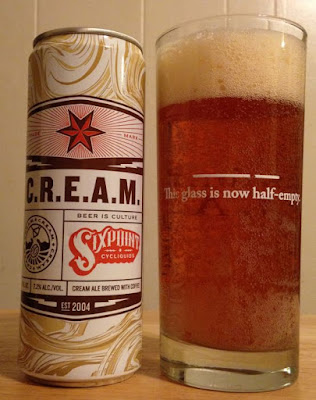 Green Flash's Passion Fruit Kicker pours cloudy yellow with a lot of carbonation and minimal head. The aroma is sweet, tangy fruit that you can smell a mile away. It’s as sweet smelling as soda pop. The flavor is sweet and tangy, too, and crisp, like a gose. A little bit of that mild, buttery vanilla wheat beer thing comes through in the finish. A little too sweet for my taste, but not bad. 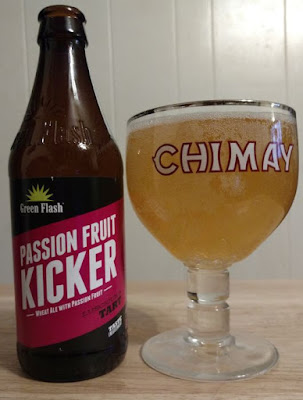 Hardywood has become my favorite home-state brewery, because when they do a style well, they do it masterfully. And what Hardywood does well is malty beers... barrel aged stouts, quads... night-time beers. Having said that, The Great Return West Coast Style IPA is very good. No one in San Diego is going to be quaking in their boots after sampling this, but there is nothing to complain about in this can, either, The Great Return pours light brown to amber with lot of foam and lace. The aroma is pine resin and bitter citrus. The flavor is light at the front but finishes with a sight candied fig quality and finally a big, hoppy flood. The price is perfectly reasonable, and the sixteen ounce cans are about right. I'll probably have this again. I enjoyed it. 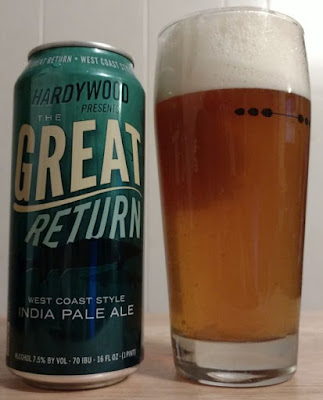