Another set of six.

She Gone is a delicious Double IPA from The Answer Brewpub in Richmond, Virginia. The brewpub sells their beer to go, and one way to get it is in a "crowler" a 32 ounce one-time-use can. I haven't been to the brewpub, a friend brought me this to sample. If this is an indication of what The Answer does, I need to visit them. She Gone is really good, really big, with gigantic grapefruit notes. It pours hazy yellow with only a little head. The aroma is all citrus; lemon and grapefruit. Huge, juicy burst of grapefruit on the front of the flavor, with a crisp floral finish. I liked this quite a bit. I can imagine all kinds of food with which this would pair well. 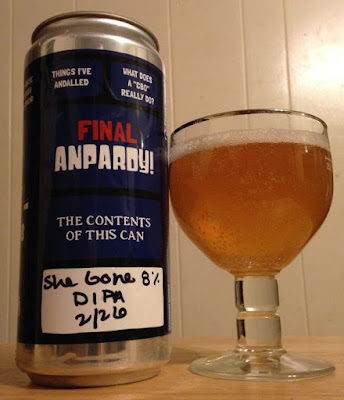 Stone is celebrating their 20th anniversary this year. One way they're marking the occasion is by re-releasing their Bitter Chocolate Oatmeal Stout, which had it's original, limited run in 2008. I had a growler fill from a local taphouse and beer store. This is the best stout I’ve ever had from Stone (not a brewery that I think of as stout technicians). In fact, this is the best 2016 beer I've had yet. This review is going to be wordy enough to necessitate something fairly rare in my beer reviews: a paragraph break.

Stone's Bitter Chocolate Oatmeal Stout just about perfect, beginning with how it looks. This is only the second beer I’ve ever given a 5 on a 5 scale for appearance at ratebeer.com (the first one being Nugget Nectar). This beer pours jet black and almost soupy thick, with a caramel colored, creamy head. The head fades quickly to a rim-ring. From the pour I could not wait to taste this stuff. The aroma is rich and extremely bitter. As bitter as a spinster’s dreams. The dominating character on the aroma is super-strong baker’s chocolate, with not a hint of sweetness. There’s nothing sweet on the flavor, either. So much strong, bitter chocolate. If you're philosophy about chocolate is "the more bitter, the better," then this beer is for you. The flavor is just baker's chocolate and coffee atop a smooth, heavily roasted oatmeal malt. The mouthfeel is chewy and heavy, and the aftertaste is this mouth-coating wall of bitter chocolate. Stone can absolutely do stout. This is proof. This is incredible. 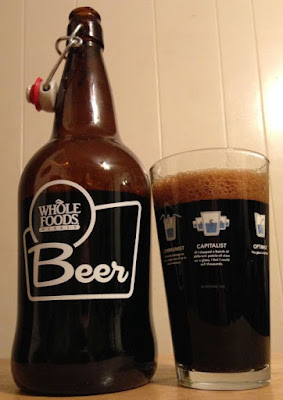 Bell's Consecrator Doppelbock is pretty good, as doppelbocks go. It's bright copper in color with very little head and average carbonation. The aroma is cherries, citrus, and sweet malt. There’s also ginger tea and spices and candied fruit on the flavor. 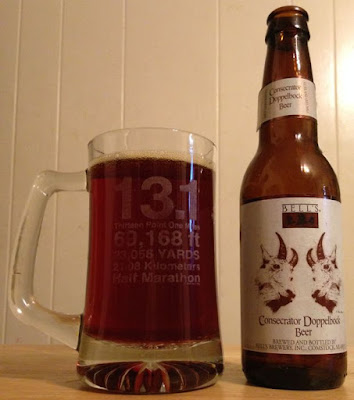 Hardywood's Bourbon Barrel Aged Barleywine is very good. It pours brown/orange in color with a little foam. The barrel aging shows up immediately on the aroma, with vanilla and spices. The flavor really is heavy on the bourbon aging, too; more of the vanilla, and brown-sugar and raisins, too. This isn't what I think of as a complex beer, it doesn't change in it's overall character as it warms. Nonetheless, this beer is delicious. 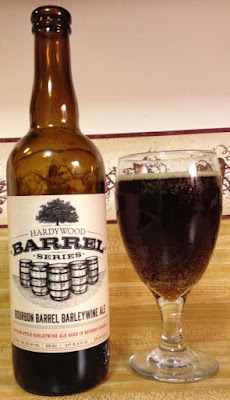 Dogfish Head is one of the few big breweries still coming up with brew names that I enjoy. This Belgian Triple style ale is called Beer To Drink Music To. It pours bright orange, with lots of carbonation, and a fair to high amount of foam. The aroma is Belgian yeast, bananas, vanilla. The flavor is strong and sweet. Closes with strong alcohol. Not bad, but nothing special. 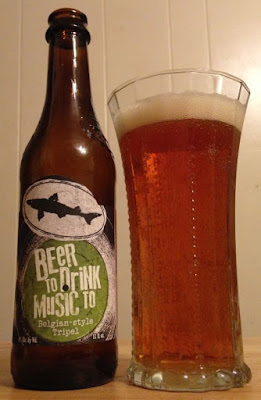 Ballast Point is becoming one of my favorite breweries, they continue to surprise me. Their Sea Monster oatmeal stout pours thick and black, the foam is thin but it leaves an obstinate lace. The aroma is rich and strong; anise, burnt malt, a little bit of tingle. The flavor is big and hearty up front, with strong cereal malt and coffee. The finish is relatively thin. The 10% ABV is completely buried under the malt. Overall, a really good imperial oatmeal stout. Unfortunately, for me, it had the misfortune of showing up the same week as Stone's Bitter Chocolate Oatmeal Stout. It just can't compare. 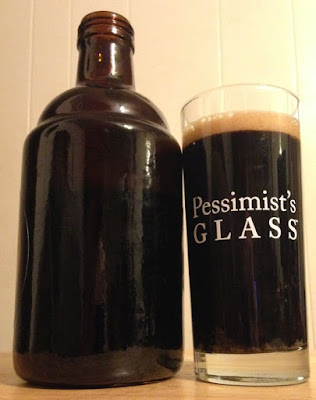