I passed up on Hardywood's Apple Brandy Gingerbread Stout when I saw it in my favorite craft beer store, and that was a mistake. I recently got a bottle as part of a trade, and this beer is delicious. I figured, from the label, that it would have too much going on to really do any of it well. I was wrong. This beer is an outstanding stout with clear ginger and apple notes, and a really warm, brandy-like finish. It pours thin but dark, with hardly any head. Apple brandy is all over the aroma, and all over the flavor, too. But the gingerbread comes through in the finish, along with raisins, spices, brown sugar, molasses, and caramel malt. This beer is complex, not at all overly sweet, and fairly aggressive. Hardywood makes some good beer, and this might be the best thing I’ve had from them. If they release it again I will buy it for sure, and I’ll buy more than one bottle. 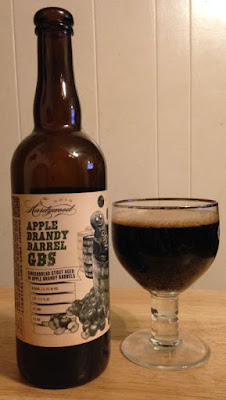 Burial Beer Company's Skillet Donut Stout is a really well balanced stout. Sweet, but not overly sweet. It pours dark brown to black with a little foam. The aroma is chocolate and coffee and sugar. Thankfully that sugar does not dominate the flavor. It leans to the coffee side on the front, with some bitter baker’s chocolate coming through in the finish, and just enough sugar to imply the donut quality mentioned in the name. This is a fine beer. 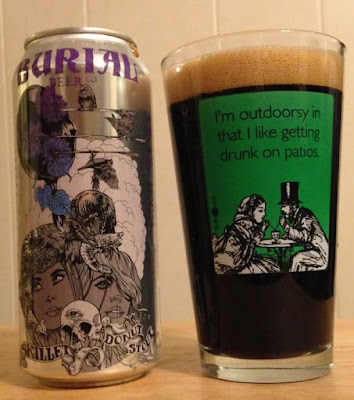 Stone's Enjoy By IPA has become just about my favorite regular release IPA. Which is a big statement. I'm really glad they are starting to release variants, and I finally got to try the black IPA version with the 2/14/16 release. This beer pours coffee-brown with average head and lace. The aroma is pine, citrus, dark roasted malt, bitter bread (something close to rye). More bitterness on the front of the flavor, and another rush on the back, plus that charcoal, smokey, roasted malt character. Not as good as the damn-near perfect regular version of Enjoy By, and probably not as good as Sublimely Self Righteous. But still a very good black IPA. 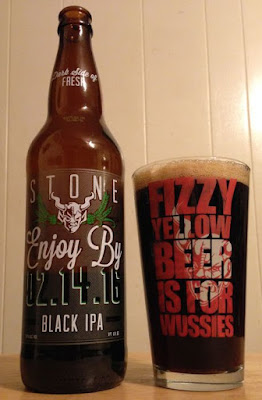 I also got to try the unfiltered version of the 2/14/16 Enjoy By. I had a growler full, and I liked it, but not as much as some of the recent regular releases (the 12/25/15 version in particular was pretty much perfect). This unfiltered beer looks like a cloudy version of regular Enjoy By; bright, light orange color with a lot of foam. The aroma is strong citrus and warm malt, like the regular release. Where I pick up on a big difference is in the taste. The hop dank sediment and unfiltered yeast in this version of the beer add an extra bitter, raw punch to the finish. It’s still delicious, but it doesn’t blow my mind the way the regular versions of Enjoy By continue to do over and over again. 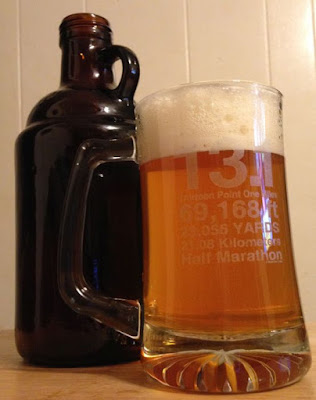 Most of what I've been tasting lately has been good to very good. Devil's Backbone's Danzig Baltic Porter is a break with that trend. I mean, it's not bad, but I love Baltic porters, and this one doesn't measure up. This beer pours very dark brown with little head. The aroma is chocolate and faint cherry notes, it doesn’t have that warm, nutty malt quality that I pick up on in my favorite Baltic porters. That quality is entirely absent in the flavor, too. This tastes more like a doppelbock, with that sulphery finish ... it lacks the bright, crisp finish of the best Baltic porters, and it got a little saccharine toward the end. But I can’t say I didn’t enjoy it at all. 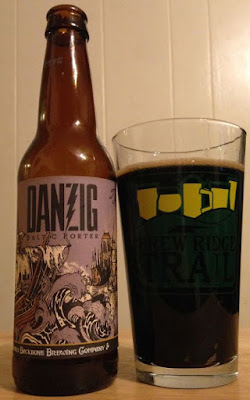 I know craft beer fans who are virtually in love with Clown Shoes, but I ain't one of them. Nothing they've released has blown me away. Their Blaecorn Unidragon Imperial Stout reminds me of New Holland’s Dragon’s Milk, but without the oak and without the liquor qualities. It pours jet black, there’s practically no head. The 12.5% ABV is up front on the nose, along with licorice, blackberries, dark bready malt. The flavor is clean up front but closes with a huge, strong, roasted-to-burnt malty wash and a little bit of tingle. It's good beer, don't get me wrong. But it reminds me of Dragon's Milk, only not as good, and no cheaper. That's hardly a reason to recommend it. 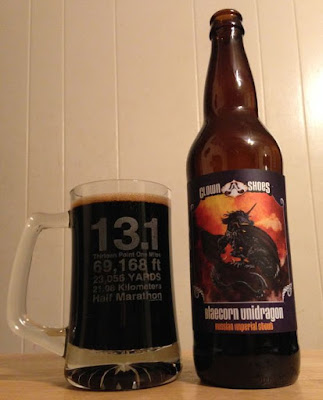