This is the first time I've posted a review of running gear, and this post is specifically a review of Saucony Xodus 6 running shoes. I bought a pair of these shoes on the last day of September, 2015, and made my first run in them on October 1st. Over the course of the last three months I've put about 400 miles on these shoes, and absolutely worn them out. I was pretty happy with the shoes and decided to replace them with another pair just like them. This picture shows the pair I've been using on the left, and my brand new replacement pair on the right. You can click the pictures in this post to see larger versions with more detail. 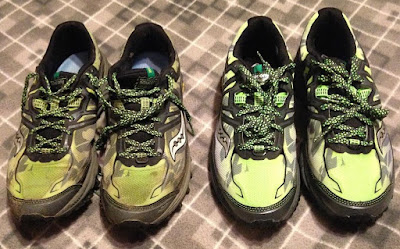 I got these shoes at a regional running store, and the sales clerk told me that I could expect to put 300 or so miles on them. Although the tread wear over the course of the last three months was intense, the shoes themselves held up well. There are no holes or tears in the bodies of the shoes, and the laces held up fine, too.

When I run, I land heavily on the outside of my heel, and I eventually completely ground the outer heels off of this pair of shoes. I run on multiple surfaces; pavement, trail, grass and gravel, but I would say I'm on pavement about 75% of the time. Except for the very noticeable lack of outer heel tread (which I could really feel in my hips), these shoes remained comfortable right up until the end. It's probably obvious that the older shoe is on the left in this picture of the tread. 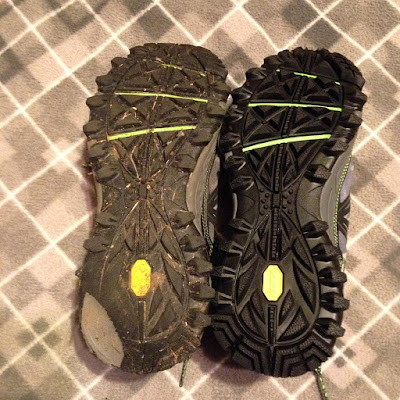 The tread is also worn on the toes of these shoes, although not as badly, so it isn't obvious in the pictures. Over the course of three months I ground the outsole so badly that it is entirely gone half-way up through the Vibrum logo. 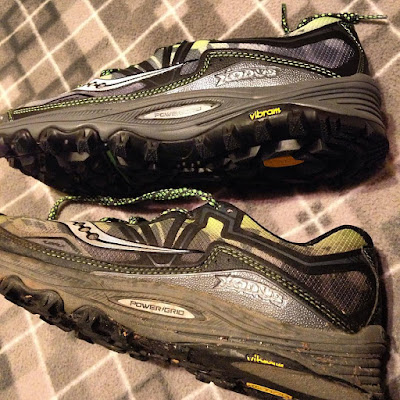 Other runners have different strides, so your millage may vary.

This is the first pair of running shoes I've owned that involved a real investment of over a hundred dollars, but my running was generally improved during the time I had these shoes. Obviously, the shoes aren't the only factor in that improvement.

I bought the second pair from Amazon; I prefer to buy locally, but took advantage of a gift card I received for Christmas. So I payed a little more for the first pair. Nonetheless, I think they were worth the money, and I look forward to wearing out this second pair. When I get the pair that follows this pair, I will probably return to the local running store and I may decided to try a new brand.