Around Christmastime I start feeling very little motivation to try new beers because all of my favorite annual releases are on the shelves. Sierra Nevada's Celebration Ale alone is reason enough to keep my fridge stocked with one specific brew for a couple of months. Throw in Brown Shugga, Founder's Breakfast, Double Bastard, Mad Elf ... hell, even Samuel Adams Winter Lager is something I look forward to every year. So there is more beer around than I need just among the known entities.

Nonetheless, I did manage to veer from the course for a few bottles of new stuff over the past couple of weeks, so here is the Christmas 2015 version of my semi-regular six-packs of beer reviews.

Troeg's Blizzard Hops is a solid beer, as is generally the case from Troegs. This IPA pours bright, clear yellow with a lot of carbonation and foam. floral and citrus hops in the aroma and on the tongue, and the finish is buttery and mild. Not amazing, but not at all bad. 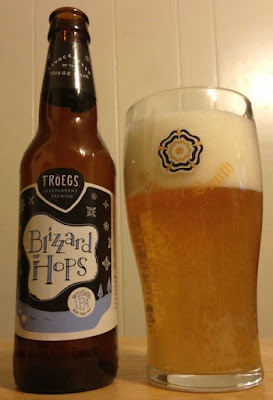 New Belgium's Ben & Jerry's Salted Caramel Brownie Brown Ale isn’t horrible. It isn’t very good, either. It’s just far too sweet. This beer pours amber brown with average head and carbonation. The aroma is malt, a little honey. The flavor is like candy with artificial sweetener. Mild chocolate, a little nutmeg. I didn’t pick up on any caramel or salt, just sugary sugar. 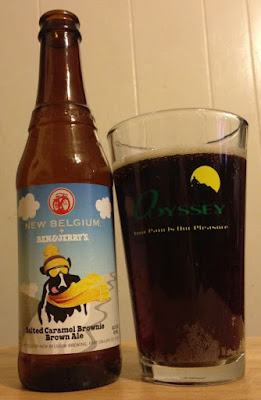 Greenbrier Valley Brewing's Wild And Wonderful Series Weizenbock is a fairly standard wheat bock; a lot like a wheat ale with that cool, crisp finish of a lager. It pours a hazy copper color, the foam fades to an average head. The aroma is mid bananas and that somewhat peppery, boiled cabbage note I associate with the style. The flavor is rich and a little stronger than the aroma implies. Stone's Depth Charged Double Bastard is their annual double version of Arrogant Bastard, but this variant is brewed with espresso. It's very strong, rich beer. Delicious for the first half of a twenty-two ounce bottle, but by the end it’s maybe a little heavy-handed. Pours a deep copper color with minimal head. The aroma is very much like regular Double Bastard, with the caramel and raisins and nuts and apples present, and a little coffee there, too. The coffee-espresso notes are far stronger on the tongue than in the nose. Primarily on the back of the tongue and in the exhale. I liked this a lot, although I don’t like it as much as regular Double Bastard. The strong, rich coffee notes in the finish began to get a little old toward the end, but not enough to keep me from enjoying the beer. 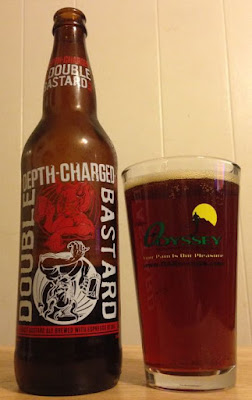 Sorry Not Sorry is a peach double IPA, and it's a collaboration between Stone, 4 Hands, and Bale Breaker Brewing. These collaborations aren't always to my liking, but they're always worth trying, and a great way to find out about tiny breweries I might never know anything of at all. This double IPA is an example of what Stone does really well, either on their own or working with other brewers. Sorry Not Sorry pours bright amber with a good bit of foamy head. The aroma is similar to Stone’s Delicious IPA; citrus hops, buttery malt, grassy notes, with a little bit of peaches in the background. The flavor is the same, with the peaches more an insinuation than an overwhelming presence. There’s a slightly rich, peach aftertaste that never gets strong enough to get old. Just one more outstanding IPA on the market courtesy of Stone Brewing. 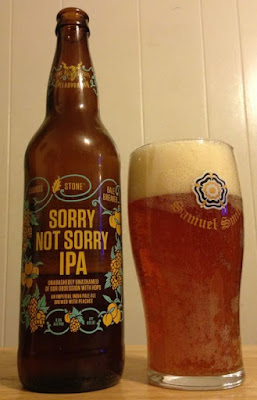 Stone's Coffee Milk Stout isn't even 5% ABV. Maybe it's supposed to be a session stout. If so, it’s still a pretty good one. This beer pours a dark brown with very little head. The aroma is salty chocolate malt and coffee. The flavor is clean and crisp and fairly light. Not bad. 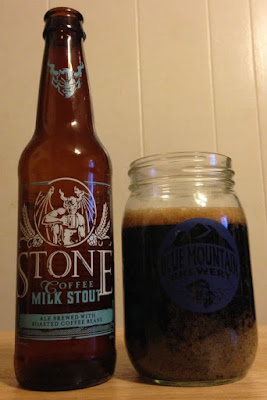