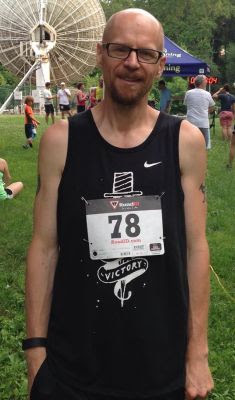 An hour before the Oh!lly 5K Trail Run, my son and I walked the first quarter mile or so of the planned course. The same thought was repeating over and over in my head... "This is not a running path. This is a hiking trail."

Running tracks, as I'd come to know them, were wide and even and flat. Gravel or paved surfaces, or at least flat dirt, and wide enough to drive a car on if you had to. Or, God forbid, an ambulance. This trail, however... this was a hiking trail. And I am qualified to point out the differences, having hiked hundreds of miles of trail over the past year. This trail was narrow, maybe two feet across. It was steep and rocky. It was uneven and hard, and it was full of roots that stuck up in inverted U shapes about four inches, just right for catching a foot and bringing a face down to foot level pretty quickly. I stood on the trail and lazily kicked at one of those roots, and optimistically told my son that a root like that would be a good way to get a middle-aged fat guy killed. A middle aged fat guy like me. My son was helpful. "Well, try not to get killed out here," he offered.

I'd picked the Oh!lly as my first formal 5K based on the following criteria:
Now, with minutes to go, I was walking the trail and wondering what I'd gotten myself into.


We wandered back down the trail to the grassy field behind UVA's Zehmer Hall, where children were playing and people were laughing, and about fifty or sixty runners were waiting for the race to begin. I fell in with that pack of runners, and nervously waited for the word go. That word came at precisely 7PM. Thirty-six minutes later I was tired, drenched in sweat, but alive and happy and crossing the finish line. I'd completed my first official, formal 5K, and my first trail run, and now that I've done it, maybe I can tell fellow newbies a little bit about trail running.

For starters, trail running is, in my opinion, a lot more like hiking than it is like running. The running I've done over the past few months has been a wonderful escape into something that combines physical exertion with an almost meditative mental state. Keep in mind that I am new to running, but when I run, I almost fall into something like a trance. My mind goes blank, I think about absolutely nothing beyond the feedback I'm getting from my body. I try to pace myself, try to keep my legs and heart and lungs harmonious. But I don't think about the surface I am running on. I don't have to. That surface never really changes much. When I run on jogging trails, that surface is gravel, and it's smooth, and usually something like ten feet wide from start to finish. If I run on circular tracks, the surface is dead-flat and has painted lanes, too. And when I run cross-country trails, what variety the trail may offer is made mundane by the repetition of making multiple laps, usually at least three or four of them. With that kind of running, it's all about the runner. Or, at least, it's all about me when I'm doing it. It's about my body, my pace, my energy level. A mile in and I go into something like auto-pilot, waiting for that feeling that kicks in after the first mile or so. That feeling that says "This feels good. I could do it forever."

That's entirely different from hiking, which is all about the world around me. When I'm hiking, I can't disappear inward. I have to concentrate on the outside. I have to look down, and think about what I'm seeing, lest I trip on a rock or a root and end up rolling down the side of the mountain. I have to look for fallen trees and logs, and sometimes for animals. I have to pay attention to my environment. And I'm always glad to do that, because it is enjoyment of the environment that brings me out to hiking trails to begin with.

Trail running is more like hiking because, based on my one trail run, I can tell you that if you don't pay attention to the environment, you're gonna wipe out. The Oh!lly is a demanding run with a lot of up-hill, some of it very steep. The Trail Runners club boasts that this course has 87% of the elevation gain of the Boston Marathon, crammed into 12% of the distance. Putting that into the simplest terms possible, that is a hell of a lot of running uphill. Much of it over rocks and mud, and over those roots I was so worried about. If you don't watch the trail ahead of you, you're gonna have a bad time. That, to me, is more like a hiking experience.

But trail running isn't about taking in scenery, it is running. It's just running on a narrow trail. I am, at best, a mid-pack runner, so early in the race, better runners were shooting past me frequently. It's race etiquette to run to the right so that faster runners can pass you on the left, and as they go past, they try to let you know they're going around you. "On your left," they say. But when you're running hard, uphill, it's not always easy to muster up the breath to say even that much. Plenty of fast runners shot past me today, many of them barely able to whisper the word "left" as they went around. Later in the race, as I myself began passing other runners who were getting tired, I realized just how hard even finding the breath for that whisper can be.

And finding the opportunity to pass another runner isn't particularly easy, either. Sometimes you want to and just can't. Other times, you're grateful for that guy ahead of you, keeping you from wearing out. I think I learned tonight that part of trail running is, the guy in front of you is both a curse and a blessing. On steep climbs and going around blind turns, it's good to have another guy there; another guy who's pace is about your own. More than once I found myself just staring at the trail in front of me, watching a pair of running shoes I'd been behind for a while, and trying to maintain an even distance. Those other runners became pace-setters for me for long stretches, and I was grateful for them. I was grateful to be able to use their feet as kind of a metronome, and go into auto-pilot at least a little bit. "Left, right, left, right," I'd think. "Jump when he jumps. Turn when he turns. Keep your eyes on those shoes."

Another thing I learned today is that the adrenaline rush other runners have told me to expect on race day is a real thing. This run was tough, and physical pain began to sneak into my upper legs toward the end. This was especially noticeable as the course turned down-hill in places and I had to sort of push back to keep from going too fast and sprawling out on the ground. The pain was always drowned out by something else, though... it's this feeling I can only describe as the "big wow," the joy of being out there and being alive and pushing myself. The feeling of my lungs working hard and my body catching second winds out of the blue. The worst part of the race, by far, was when the "big wow" ended as I crossed the finish line. When that feeling was replaced by a feeling like "now what?" Toward the end I passed a few runners who were headed back out onto the course. These were more seasoned trail runners who were turning a 5K into a 10K. Men and women who'd responded to the question "now what?" with a decisive and obvious answer: more.

That's my answer, too. More. But, unlike those seasoned and well worn runners, I needed a break and a beer. After all, I had something to celebrate. And I have other races to schedule.

Running on my own is still a primary preoccupation, and I'm getting better at it. I've managed to run the entire distance of a 10K once, and I've done 5 miles a time or two. It's nice to actually feel a little over-trained for something. It's nice to go into something with the confidence that I'll be able to complete it and feel good. I hope to run another formal 5K before the month is out, and I hope for my next one to be on flat ground. Something more conventional and less demanding than a trail run. It'll be nice to experience that as part of the pack, and be able to find out if I'm correct about being a middle-of-the-pack runner. I'm thrilled to think that that's where I rank. Consider me the happiest "also-ran" in history.