This isn't really a review of a beer, it's a review of a recipe, you might say. Some time ago I started hearing talk on some of the craft beer forums of combining Founders Imperial Stout with Founders Rübæus, the brewery's seasonal raspberry ale. Now that Rübæus is on the shelves again (it's a warm weather beer), I picked up a bottle and tried the mix. I like both beers on their own, particularly the stout. I'm not surprised that I like the mix as well.

Different people like the two beers mixed at different concentrations. I tried a simple one to one ratio. The color of the mix was dominated by the black of the stout, as was the aroma. I picked up on a little of the tart Rübæus presence in the nose, but mostly smelled the familiar, strong, roasted malt richness of FIS. The flavor is where the raspberry really shines through. On the front of the tongue, all I noticed was the stout. On the swallow, that raspberry gets lose and really takes over. I was surprised again, as I always am, at how much Rübæus tastes like real raspberries. This isn't an artificial, raspberry-flavored-candy kind of thing. It really tastes like raspberries. Tart fruit notes dominate the finish. The overall effect, as I expected, is like a raspberry/chocolate dessert.

This isn't a combination I'd want every day. But, shared between two people, it might be a perfect drink for after a meal. I'll stick to the Imperial Stout in it's original form, as far as a preference. Founder's Imperial Stout is one of my very favorites. But I would not object in the least to another glass of this recipe, mixed at exactly the same ratio. 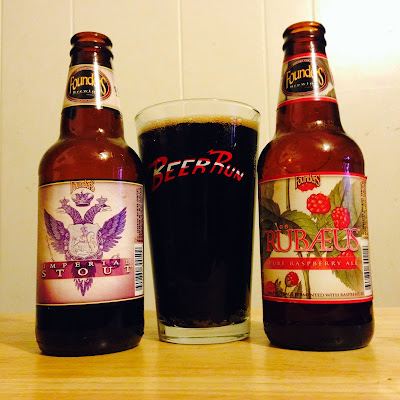