This is a Constitutionals post, part of the continuing (but infrequent) series of posts about my attempt to lose weight and live a little healthier. I've posted recently about some of the hikes I've taken this year, and I've linked to some of the pictures I've taken, but I haven't said much about the personal progress I've made since my first post on the topic.

Well, I'm glad to say that I've actually made some progress. In fact, I'm enjoying exercising regularly, and I'm actually pretty happy making better nutritional decisions. It's only been eight months so far, but I'm down a little over a hundred pounds, and I hope to say that this is a new way of life for me. I still have work to do. I still have a mid-section that is an awful mess from years of neglect. Cardiovascular exercise alone won't correct that. But I've recently added strength training to my regimen, and I hope to see some benefits from that. 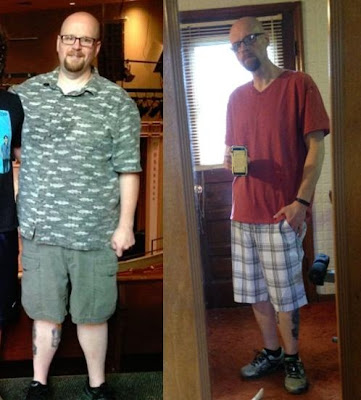 One thing hasn't changed. I still enjoy wearing the ugliest shorts I can buy.


When I first started this series of blog posts, I actually intended to update frequently with the MapMyFitness stats for each of my walks, and a series of pictures. Well, that idea fell by the wayside. That's good, though. Well, the reason it fell by the wayside is a good thing, anyway. I lost interest in making those frequent blog posts because the novelty of walking and hiking for exercise soon wore off. It didn't seem to be worth making a big to-do at the blog about my hikes and walks anymore, because there was nothing unusual about the hikes. Hiking isn't a field trip, it isn't a special adventure that's worth documenting each time. It's just what I do. It's my thing. At this point, a trip to wander a mountain trail is no more noteworthy for me than a trip to the grocery store might be.

I actually love it. That's shocking to me, I admit. But I do. At this point, I do the hiking and walking for the love of it, not as a means of losing weight. The weight loss and the gaining in personal fitness is still happening in the background, but it isn't the goal anymore. I'm not getting out there because I want to slim down. I'm getting out there because I want to be out there.

Well, I was getting out there, that is... until I blew out my right knee in late February. As I wrote last summer, the inspiration to lose weight came in the form of an accident that resulted in a blown left knee. This year, it was the other knee. Because of that, and because of the surgery and recovery, I've not been able to do any actual hiking for a few weeks, now. But I'm still walking in town for exercise. That, my doctor says, is perfectly OK to do. Since August of 2014 I've walked more than 800 miles for exercise, according to MapMyFitness. And, next week, when my doctor releases me to return to work and to my regular activities (as I expect him to), I hope to begin hiking again immediately.

I've also added free weight training to my exercise routine. That is new to me, and not something I particularly enjoy. But I know that strength training will make me a better hiker, and make me better able to get over rocks, up tough inclines, and past forest hazards in general. I hope to stick with the strength training, and to see benefits of having done so this summer.

And I hope to post other blog entries down the road, as I hopefully continue turning around 45 years of bad habits.

You know, in 2007, I was diagnosed with cancer in my bladder. The mass was not aggressive, but it had been growing for some time, and by the time they found it, it was huge. About 46% of my bladder capacity was consumed by the mass (which explains why I'd been urinating so frequently for about twenty years). Anyway, in 2007, the doctors cut the mass out a little at a time and saved my life. I was thankful, but until just last year, I made absolutely no effort to make their life-saving work worth their time. I'm living on borrowed breath today. I realize that now. That cancer would have killed me at some point in the last eight years if the urologists at UVA hadn't stepped in. Every second I have now is a second they gave me. I hope to be worthy of that gift.