I'm constantly telling myself I'm going to write more movie reviews for this blog, but I never follow through. My main reason for wanting to write movie reviews here is simple; writing movie reviews is fun. It gives me a chance to think about movies and consider how good movies work, and what it is about bad movies that makes them fail to work. And it gives me a chance to savor what it is I liked about a movie I've recently enjoyed. Even if no one else ever reads a word I've written here (and, that's very likely going to be the case), writing a movie review still gives me a little more for my price of admission than I'd get otherwise. 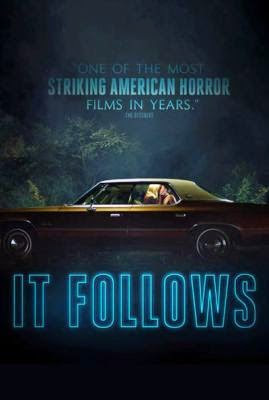 Today I saw It Follows, which is, as of this writing, the best reviewed current release at Rotten Tomatoes (at 95% fresh). I absolutely love a good horror movie; The Exorcist is one of my five favorite films of all time, and even lesser horror movies often deliver the goods on one level or another. Some of the better horror movies of the last ten years include The Descent, Cabin in the Woods, The Babadook, and The Exorcism of Emily Rose, all of which work in ways that transcend simple horror/gore conventions. And all of which were well reviewed by mainstream critics. So, with It Follows getting strongly positive reviews, I was certainly interested in seeing it.

In short, It Follows is the least of the movies mentioned in this review, but it is still a worthwhile film. It's a genuine movie, with subtext, good performances, and direction that gets the most out of a tight premise. I can't recommend it to people who don't already enjoy horror, and I'd especially not recommend it to people who aren't willing to do some of the heavy lifting required to let a spooky story get under your skin. But, if you can forgive a few weak plot points, and especially if you're a fan of classic horror movies, It Follows is worth a look.


The premise is like something straight out of a classic '80's horror/slasher film. A young woman has a one night stand with a guy she doesn't know well. After they've had sex, the guy tells her that he's passed a sort of curse on to her. He tells her that she'll soon be stalked by a shape-shifting spectre that wants to kill her. He tells her that this demon can take the form of people she knows, total strangers, or even people who've died. And he tells her that it will stalk her relentlessly until either it overcomes her, or she has sex with someone else and passes the curse on.

It Follows relies on some of the same subtext that made the original Halloween and Friday the Thirteenth such classics of the 1980's. Guilt over promiscuous sex and the perils of youth are heavy themes that add to the vulnerability of the principle characters, just as they did in those genre classics from thirty years ago. But It Follows has more than just retro-themed familiarity in it's subtext. This movie is set in suburban Detroit, and urban decay plays throughout the film like a leitmotif. Images of abandoned or neglected homes and buildings are a constant source of the movie's overall tones of dread and gloom, and by the end it all amounts to some genuine foreboding. Direct allusions to the wrecked nuclear families of the young characters are never called upon, but that , too, is a source of the movie's power. There are no talks between mothers and children about the absence of dead-beat fathers, but overt statements aren't necessary. The decay of the family is writ large in the background, on sinks filled with forgotten dishes, above-ground pools in need of cleaning, and rusted cars. The desperation of the characters in this movie seems palpable, and it got to me. Good performances by Maika Monroe and Keir Gilchrist amp that desperation up a notch.

Writer/director David Robert Mitchell manages to pull off a lot of genuine creepiness on what I have to assume was a shoestring budget. The movie begins with a long shot wherein the camera sweeps it's environment in 360 degree turns. That trick is used throughout the film to establish, subtly, that we are checking every corner for something menacing. By the time it's over, even the image of an otherwise innocuous stranger in the background of any scene becomes unnerving. Mitchell understands what a viewer's eyes naturally do while watching a movie, and he manages to make the audience participate in creating it's own unease. There aren't elaborate CGI effects in this movie. Instead, we spend most of the film scanning the faces of random characters for anything otherworldly. It works.

I'll deduct points for two unnecessary and cheap jump-shots that happen early in the film; flimsy genre tricks that are clearly beneath a director who establishes tone as well as Mitchell does. There is also a climactic confrontation that sort of falls flat. Excepting those elements, It Follows manages to do something few horror films do... it creates, and sustains, a sort of sickening dread. A dread that stuck with me for the rest of the day.