Firestone Walker is the brewery that turns me around on styles I think I've figured out and dismissed. Their Wookey Jack is the first black IPA that I ever went apeshit over. I'm not the world's biggest barleywine fan, but Firestone's Succaba is one of my top ten beers of all time. And now, after shrugging off saison as a lightweight ale, I've tried a Firestone Walker farmhouse saison that I loved to the last drop. Opal is just that good, and it's probably stocked plentifully at your grocery store.

Opal ppours a cloudy gold color with a tenacious, foamy head and a great deal of carbonation. The aroma has the Belgian/saison thing going on; breakfast fruits, bananas, citrus, plus dry wine notes and some twang from the hops. The flavor is all of that, but juicer and more tart through the middle than I had expected. Then the finish is bright and dry. Ommegang’s Glimmerglass had previously been my favorite saison, but I think this has the edge. And at 7.5% ABV, it packs a bigger punch than the other saisons I've had. Hell, Firestone could have probably justified throwing the word "imperial" on the label somewhere. Had they gone that way with the marketing, I'd almost surely have tired Opal long before now. Just by way of comparison, this is an infinitely better beer than Burning Rosids, which Stone marketed as an imperial saison last year. 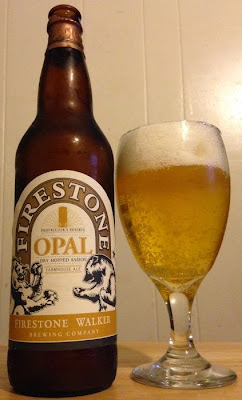