Xocoveza Mocha Stout is a collaboration between Stone, Insurgente, and a brewer named Chris Banker. This is a damn fine beer. It pours dark brown with a mountain of head, the aroma is rich and spicy. The aroma is where I really detected the coffee and peppers promised by the label. I liked the aroma, but I wasn't sure if I'd like those notes in the flavor. But the flavor is where this beer plays the rest of it's hand in grand style. The coffee is there up front, but the vanilla really comes out on the finish, along with kind of a caramel/nutmeg blast right at the end. As it warmed I thought the nutmeg and cinnamon became more pronounced. I never thought I'd be able to taste everything this beer promised on the label, but it's all there, either in the nose or on the tongue. This is a LOT of plates to keep spinning at once. I can't believe they pulled it off. This is one of Stone's best collaborations. I am honestly astounded at just how good this beer actually is. 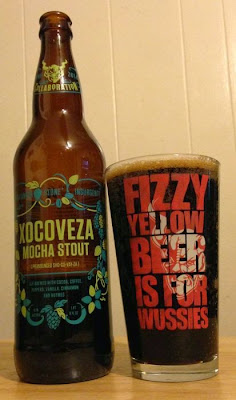