One more of my few-and-far-between whiskey reviews. For the most part, my tastes in whiskey are simple. I find something I like and I stick with it. My favorites these days are Jameson and Templeton, and I rarely try anything new. But today I decided to give a new rye a go. Bulleit Rye is new to me, and fairly new in general, having been launched in 2011.

It isn't going to replace Templeton as my go-to rye, but this is an abundant and appetizing whiskey. Bulleit Rye pours a pale bronze and smells very strong and sweet, like butterscotch and candied fruit and spice. The flavor is somewhat on the medicinal side, but that's to be expected at 90 proof and 95% rye mash. There is a mint character I associate with cheaper bourbon, but it doesn't dominate the flavor. It's just there, in the background, always present but never overpowering. Like the best brown liquors, this is for sipping and savoring, not for guzzling. I like my whiskey chilled and served straight-up, but I poured this one neat from a room temperature bottle. So I can't comment on complexity changes as the beverage warmed.

Bulleit Rye is pretty good. I'm still a Jameson man, for the most part. Templeton is probably going to remain my favorite rye, and Maker's Mark bourbon will probably always be one of my reliables. But I don't think I'll have to talk myself into finishing this bottle in time. 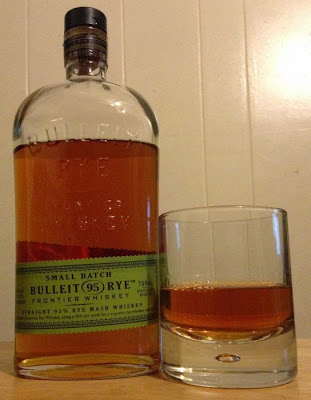