Sierra Nevada's Harvest Wild Hop IPA is fantastic beer. It pours bright, clear and golden, with a splotchy head that leaves persistent lace. The aroma is pine, citrus, apples and something like white wine in the background. The flavor is much more bitter and astringent than the sweet notes on the aroma imply. Sticky, sharp pine quality dominates, followed with pepper and a very musty malt. I'd think this beer could be billed as a double IPA, and it might be if it didn't have a fairly restrained ABV (only 6.5%). Yet another limited edition Sierra Nevada beer that deserves to be sold year round, and in six-packs or twelve-packs. It's a shame that it won't be. 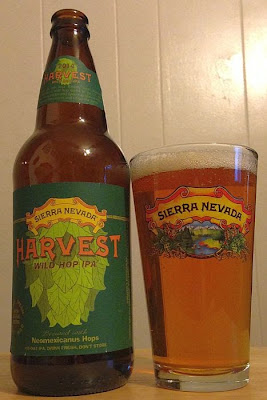