New Belgium's Skinny Dip is a light beer, and I don't like light beer, and I'm never going to like light beer, and I need to just accept that. New Belgium bills this as a Belgian ale. If I understand correctly, it used to be called Loft, and the current name reflects a slight change in the recipe. This stuff is a clear amber color with no head and no aroma to speak of. It smells like a watered-down version of a watered-down, nondescript Belgian ale. It doesn't taste bad, but that's because it hardly has any taste at all. On the exhale there's a little hint of something, like maybe I had a Belgian ale several hours ago and noticed something on my own breath when I burped. I will never drink this again. 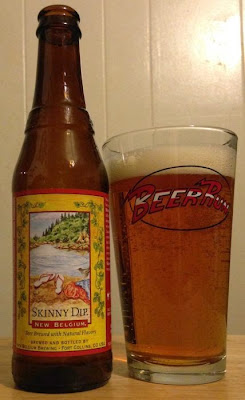