New Belgium's fall seasonal is Tour de Fall, a pale ale. I think a pale ale is kind of an odd choice for an autumn beer, but hey... anything that isn't loaded with freakin' pumpkin this time of year is welcome in my fridge. Tour de Fall pours a golden brown that gets clearer after a minute, and leaves some sticky lace. The aroma is a lot like Sierra Nevada Pale Ale; I’m probably picking up on the cascade hops.

If you're gonna talk like Sierra Nevada, you better walk like Sierra Nevada. And this beer falls short on the tongue. Tour de Fall is dryer and more acerbic than Sierra Nevada Pale Ale, and those aren't necessarily bad qualities. But this ale doesn’t have SNPA’s rich, tart, fruity character. Or much character at all. It's got no grit. It just kinda lays there. Not a bad beer, but nothing special. Especially for a seasonal. It does get points for not being another pumpkin beer or another Octoberfest, though. 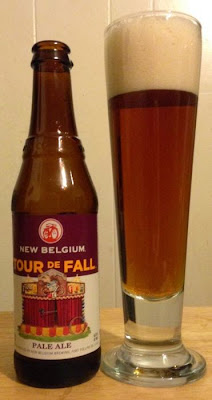