There was a hell of a lot going on over the last couple of weeks and I missed a lot of walks. Most of my recent walks haven't been particularly photogenic, anyway. I've just walked around town after work, stuff like that. But today I got back onto a hiking trail and really enjoyed the early fall weather. And I got the absolute hell scared out of me by an owl about the size of a minivan. More about that in a minute.

First my map and stats:
Create Maps or search from 80 million at MapMyWalk
Anyway, so, yeah, I came around a bend in the trail at one point and saw something just to the side of the trail ahead of me. It looked like an animal at first, something about the size of a medium-sized dog. Then I thought it was a stump. Like, someone had dragged an uprooted stump out of the woods and left it beside the trail for some reason. Once I got within fifty yards of it I realized it wasn't a stump. It as alive.

The damn thing turned it's neck around and looked at me, and it's eyes appeared to be about the size of softballs. And then it spread it's wings, and in an instant it was over the trees and gone. I'd seen an owl, only the second one I've ever seen in my life. And it was huge. I don't know what kind of owl it was, or what it was doing on the ground, or why it was out and about still fairly early in the afternoon. But it stopped me dead in my tracks, and it damn near caused a fat guy to have an owl-induced heart attack in the woods.

I've heard scientists theorize that owls are responsible for all kinds of eerie reports of odd stuff in the woods. Everything from the Jersey Devil to the Mothman is sometimes explained away as scary (but entirely ordinary) encounters between humans and owls. I totally buy it now, too. Because I recognized this damn thing as an owl, I knew what I was seeing, and it was still scary as hell.

Because, first of all, it's wing-span was, I would estimate, about 900 feet. When it spread it's wings I thought for a second it was going to scoop me up and fly off with me. Beyond that, it had that otherworldly owl face, man. Owls don't look like birds. They look like the devil. I had just enough time to see it and think "Hold on a second, Mr. Owl, I need to stand here and crap my pants for a minute, OK?" And then it was gone. My only hope is that it is somewhere right now, talking to it's owl buddies, saying "So, I saw a human today! Man, those things are even creepier in real life!"

I took one panoramic shot of the river while I was walking, you can click it to see the full size image:

And I took a few other pictures along the trail: 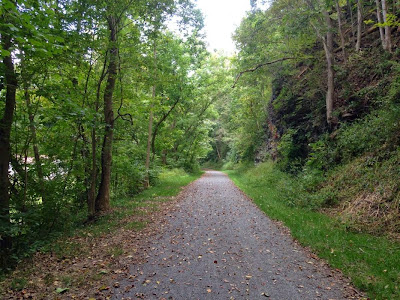 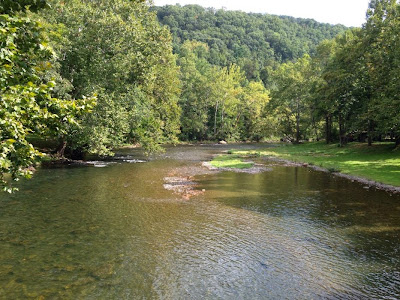 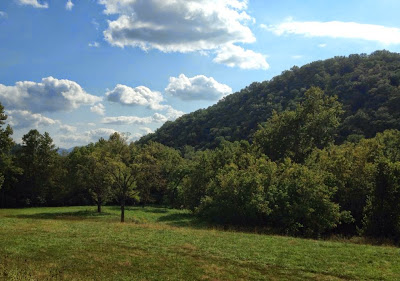 Leaves are starting to fall and there is a genuine autumn nip in the air. The walks are going to be more fun over the next few months, and the pictures should be prettier, too.