Trader Joe's is a craft beer lover's paradise. There are a number of craft breweries who bottle beer for Trader Joe's to market under their various store brands, and these beers are usually pretty good. And they are always dirt cheap. Minhas Craft Brewery in Monroe, Wisconsin, bottles some of their beers under Trader Joe's Boatswain brand, including their double IPA. At Trader Joe's it's called Boatswain Twin Screw Steamer. Other retailers sell it as Imperial Jack. So, now that we've established all of that, how is the beer?

Well, it's not bad. It pours hazy orange, with average head and lace. The aroma isn’t that inviting, it reminds me of boiled cabbage. I do like boiled cabbage, but not in my beer. The flavor is better than the aroma. Tangerine, buttery cereal malt, and a mild hop on the back end. Thin finish, watery mouthfeel. It might be a stretch marketing this thing as a double, were it not for the 8%+ ABV. No, it's not amazing, but, come on... it's less than $3 for a double-deuce. All things considered, I really can't complain about this beer at all. 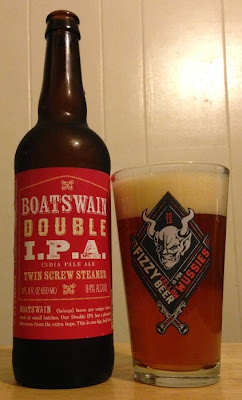