Today I stopped at a wine and beer store in Lexington and I got to poking around on a dusty back shelf, where I found a two year old bottle of Epic Brewing's Santa Cruz Brown Ale. I should say that I have not enjoyed Epic's "Brainless" selection of fruit beers, but most of their other stuff has been right up my alley. I thought it was possible that I'd found a little treasure here; something that had somehow fallen between the cracks in a store that mostly caters to a wine crowd. And I was right ... at least about what I'd found. This was one damn fine bottle of brown ale.

Santa Cruz poured dark brown with creamy foam, and the aroma was rich malt, apple-butter, caramel, mild coffee. The flavor added bready and nutty notes, and kind of a burnt-popcorn thing in the background, with some hoppy tingle on the finish. More warm malt filled my nose after each swallow, making me want each next sip all the more. This beer was delicious.

I checked Epic's website, and saw that they release Santa Cruz every March. Like Big Brown Baptist, Epic's outstanding imperial stout, this seems like another beer that becomes damn-near flawless if you put a couple of years on it. If I can find the current release I'll pick up two bottles... one to try now, and another one to forget about for 24 months or so. 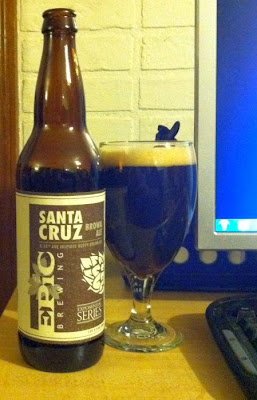