Matt's Burning Rosids is a smoked saison that Stone brews in honor of Matt Courtright, a young brewer who was killed in an accident at the brewery about a year ago. This is a recipe of Matt's conception. Stone calls this saison "imperial," usually a word that bodes well for me. But, apparently, not always.

Usually, saisons are too delicate for my palate. I have the opposite complaint with this one... this beer is ham-fisted. It is nice to look at, though. It pours bright, ultra-clear amber with persistent carbonation and creamy head and lace. The aroma is like a Belgian, it’s got that banana thing going on with the yeast. But the smoked malt is really huge right out of the gate. The flavor is dry (10.5% ABV) and sweet, and that sweetness is sticky and strong, almost cloying. The mouth-feel is warm and tacky, like a barley wine that hasn’t seen enough aging. I've never complained about Stone brewing something that's too sweet for me before, and I have to believe that if it weren't for their understandable desire to honor their friend, this beer wouldn't have been produced. I won’t have this again.

I feel bad for writing a negative review of a beer brewed in honor of a young man who died tragically. To atone for that, here is a link to Go Design, Inc, a charity that helps design and build strong and safe buildings for the people of impoverished nations. Go Design was a cause that Matt Courtright held dear, and Stone is contributing a portion of this beer's profits to that organization. 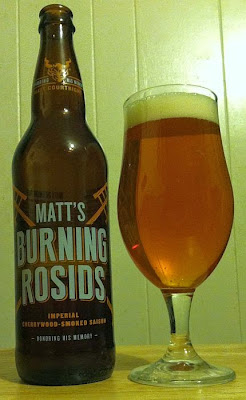