Before I review When I Need A Friend, the new album by Dan Yell Sun, I should qualify my perspective: I'm an old fart. I'm a child of the 80's, and most of my favorite bands at least existed by the end of that decade. There hasn't been a tremendous amount of new music I've enjoyed over the last fifteen years. So it's exciting to me when I hear a new album by a new group, and I actually enjoy it. It's even more exciting when that band is from my own neck of the woods. 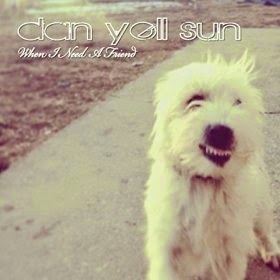 Dan Yell Sun is from my hometown of Covington, Virginia. Their new album, When I Need A Friend, is to be released next Tuesday. I was fortunate enough to get an early copy about a week ago, and it's been a steady presence in my iPod and car stereo ever since. The album is fun, accessible, inviting rock and roll... music that fits summertime as naturally as watermelon and cold beer.

When I Need A Friend opens with "How Fierce It Is", a blast of infectious pop punk, and most of the album stakes out that same territory confidently. But there is a good-natured groove to my favorite tracks on this disc; something that transcends the limits of that genre. For instance, "More Than Ordinary" has a melody and an innocent quality that conjures up The Beach Boys without a hint of irony. "The Riot" reminds me of the pure, goofy joy of the first Motley Crue album. And "Bomb Promise" is as simultaneously aggressive and catchy as an early Bad Religion track. This band hasn't limited itself in terms of influence. Good songs can be found anywhere, and a good band can evoke the best qualities of any other. When I Need A Friend had me grinning with recognition from the get-go.

The best thing about this album is that it saves it's strongest tracks for last. Synthesizer and dense production give "Ctrl+Alt+Delete" and "Brand New Canvas" a dreamy, trance-like quality that was immediately accessible to someone like me who loves prog-rock. Not that you have to be heavily into Radiohead and Pink Floyd to enjoy these tracks. The combination of unapologetic prog tones and pop sensibility will be instantly familiar to fans of bands like Muse and Silversun Pickups. I hope the band explores more of this kind of thing in future releases; they obviously have a damn good feel for the sound.

When I Need A Friend is instantly familiar and fresh, and has something to please anyone who enjoys energetic, tight rock music. I'm proud to hear local guys turning out music this good.