MOVIE REVIEW: A MOST WANTED MAN

We saw Anton Corbijn's A Most Wanted Man over the weekend, and I thought it was a very good movie. It's a procedural thriller about espionage and national security, and before you see it, you should know that this film is tense, slow, heavy on dialogue, and very dry. This is not a thriller along the lines of the Jason Bourne movies or The Manchurian Candidate. Action scenes are few and brief, and terrorism is discussed without every being overtly displayed. This movie isn't about events, it's about people and the principles that motivate them. This is a movie with a pivotal scene about a man seated in a banker's office, and whether he will or will not sign a document to transfer some funds. It is a credit to the director and the actors that the scene is as tense and nerve-racking as any scene I've ever seen about defusing of a bomb. 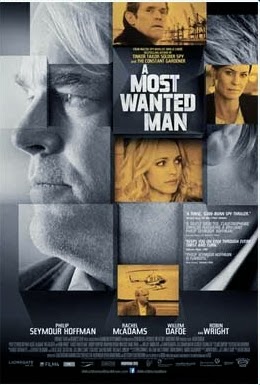 A Most Wanted Man is the last movie that Philip Seymour Hoffman completed before his unexpected death last year. This performance makes his death hurt again, and gives movie fans another reason to consider the talent we've lost. Over a twenty-five year career, Hoffman morphed from a likable screen presence into one of the best actors of the last decade. Daniel Day-Lewis, Denzel Washington, Robert De Niro, Anthony Hopkins ... Hoffman's acting was in that kind of company. In this movie, Hoffman plays Gunther Bachmann, an agent of the German government who heads a detail concerned with preventing acts of terrorism in Hamburg. Bachmann's work is all consuming, and involves tracking down and identifying potential terrorists, forming bonds and developing relationships with insiders, and figuring out which leads are dead ends and which are immediate threats. All of which is dangerous and difficult, but none of which is as dangerous or as difficult as the other part of Gunther job... dealing with the governments of Germany herself, and her duplicitous allies.

Gunther Bachmann is as complex as any role of Hoffman's career. This is a man who has to focus on a clear imperative, preventing terrorism in a major city. To pursue that goal, Gunther has to walk precariously. Men like this live in the gray between the legal and the illegal, between the moral and the immoral. Gunther has a clear sense of self and a firm philosophy. This is a principled man in a world where laws must be compromised and lives must be lost.

A Most Wanted Man asks the audience to consider the questions that have defined much of our social interaction since 9/11. If given the chance to live peacefully, will people do so simply to stay on the path of least resistance? Are lonely souls vulnerable to the acceptance of dangerous groups? Gunther believes he knows the answers to those questions. His ideas and decisions present a man who is concerned with human nature. A lesser actor wouldn't have found the relatable texture in a such a cerebral character. But Hoffman makes Gunther Bachmann weary, wise, engaged and exhausted. It's a performance that young actors should study.

A Most Wanted Man is based on a John Le Carre novel that had some right wingers bristling with anger, accusing Le Carre of being anti-American. That idea amuses me. The movie (and, apparently, the source material) does feature agents of the American government who are dishonest and manipulative. That is only anti-American if you believe that the American government and the American people are the same thing. That's ridiculous. I'm only one of many red-blooded Americans who believes that our own government is corrupt, dishonest, ham-fisted, and every bit as power hungry as it is presented in this film. Besides that, The dishonest American agent in this movie is working in collusion with German government agents who are equally manipulative. A Most Wanted Man argues that people acting in groups are often given to the thoughtless and destructive use of force... it almost doesn't matter if those groups are religious extremists or government agencies. I agree with that. I also agree, as this movie seems to assert, that even within governments there are sometimes moral men and women who are consumed by difficult and thankless work.