I haven't reviewed much whiskey at this blog, and I always feel compelled to qualify the hell out of my whiskey reviews: I don't know crap about whiskey. All I know is what I like. That's true about beer and movies, too, but I've drank a ton of beer and seen a lot of movies. Whiskey is serious novice-territory for me. I'm less than a novice. I'm a total noob.

But I can tell you that I like Tullamore Dew Irish Whiskey, and that for the price, it's one of the best whiskeys I've had yet. I'm certain that I'll buy it again.

Tullamore Dew pours very pale gold in color, and the aroma is mild and sweet. There is vanilla all over the aroma, and some mint, some spice. The flavor is very mild, too. Downright subtle. Keep in mind that, when it comes to whiskey, I almost only ever drink Maker's Mark and Templeton Rye, so Irish whiskey in general is very new to me. This stuff is downright delicate compared to the bold and robust bourbon I'm used to. The flavor is malty with just a little mint, but not a medicinal, mouth-wash kind of mint like I associate with cheap stuff. The mint here is an afterthought; a ghost. The really surprising thing about a sip of Tullamore Dew, to me, is the finish. It's very quiet. No huge vapor, not a bit of aggression, this whiskey finishes as quietly and smoothly as a sip of water. That's not to say it's watery, because it isn't. But it's very smooth. Very clean.

I'll be honest, bourbon and rye are more my style. I smoked for thirty years and that left my tongue almost incapable of enjoying delicate flavors. If food and drink doesn't hit my mouth like a sledgehammer, sometimes I can't enjoy it. But I think a bottle of Tullamore Dew Irish Whiskey would be good to have on hand for those evenings when I'd like something a little different from my usual. And with a price-tag that's more than ten dollars cheaper than my usual favorites (for the comparably sized bottle), I can see me warming up to this stuff pretty quickly. 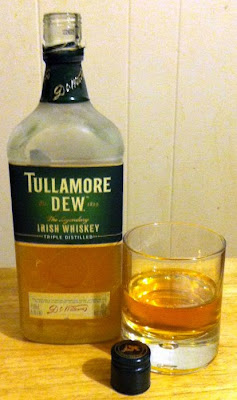