My friend (and, yes, a former spouse) Wendy is a big Jason Isbell fan, but she hasn't heard much music from Drive-By Truckers. That's interesting, because most Isbell fans were introduced to him during his tenure with that band. DBT launched Isbell's career, and when he left that band and started his own, it ended up working out great for the fans... because now we have two damn good bands instead of just one. And it's even become a good scene for the musicians themselves. Jason gets along great with the remaining Truckers, as a recent Instagram post clearly shows: 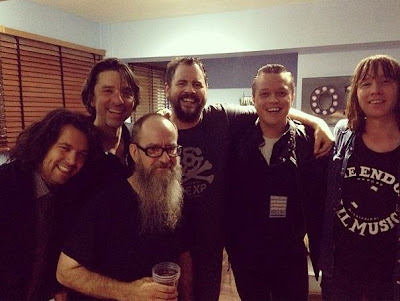 The current Drive-By tour is going to stop near where Wendy lives, and she told me she was considering seeing the band, even though she doesn't know a lot of their material (other than the songs Isbell contributed to the Trucker canon). She asked me for some input, and said, hell, I'll do better than input. I'll put together a DBT playlist for ya.

So consider this a Drive-By Truckers primer from the point of view of this fan, realizing that lots of fans would probably pick different songs for different reasons. If you stop ten DBT fans and ask each of them to name their five favorite songs by the band, you're probably gonna end up with a list of forty or fifty different songs.

I will say upfront that I'm not going to include any of Jason's songs on this list. Primarily because Wendy already knows those songs, and I'm trying to introduce her to material she's going to hear if she catches the current tour. So this list is going to be all Hood and Cooley material, but that's not because I don't love the songs that Jason wrote and played with DBT. Neither, for that matter, is this list intended to slight Shonna Tucker's contributions to Drive-By. I'm only skipping her songs because, like Jason, she took them with her when she left the band, and the Truckers won't be performing her material on the current tour. So no complaints because this list skips "Decoration Day" and "Never Gonna Change" and "Home Field Advantage," a'ight?

And one last disclaimer. You should know going in that if your life is white, clean, and neat, there isn't much here you're going to relate to. These aren't the kind of songs you're gonna hear from the likes of Beyonce, Blake Shelton, and Maroon Five. These are songs about people who's stories would never get told if Hood and Cooley weren't out there telling them. I think it's probably easy to write love songs. It's easy to look at pretty people who are in love and happy and come up with a few lines that rhyme about them. But that ain't what Hood and Cooley do. They look at people who live in poverty and pain, people who struggle with addiction and dysfunction and mental and physical burdens, people who the rest of the world would like to pretend don't exist ... Cooley and Hood look at those people and think "This man deserves a song." To me, that's pretty special. Thank God for DBT. Thank God for honest rock and country.

OK! A list of my personal favorite DBT songs.

I'll start with the song that got me into the band. Mike Cooley's "Where The Devil Don't Stay" is the first track on my personal favorite Truckers album, The Dirty South. This track opens that album with a great, heavy, southern rock groove similar to Charlie Daniels "Legend Of Wooley Swamp," and the lyrics are classic DBT. This is a story about bootlegging, violence, addiction and dysfunction. It's rare for the ugly side of the south to be presented without mockery or contempt, but "Where The Devil Don't Stay" does just that. This is a clear-eyed, brutally honest look at the impoverished rural south of the 1920's.

Son come runnin', better come quick.
This rot-gut moonshine is making me sick.
You're mama called the law, they're gonna take me away
Down so far even the devil don't stay.

It's hard to know how to pick the right first Patterson Hood song for any DBT playlist. Patterson's material runs the gamut, from tender ballads to progressive folk, to full-on rockers. One of my favorite rockers is "Hell No, I Ain't Happy," a song that aims to shoot down the myth of the partying life-style of the touring rock musician. To hear Hood tell it, there's as much drudgery on the road as there is in any dead-end job. The great irony is that he tells that story over one of the catchiest, heaviest songs the band has ever turned out.

There's a pretty little girl outside the van window.
'bout eighty cities down, eight-hundred to go.
Six crammed in, we ain't ever alone.
Never homesick; I ain't got no home.

Mike Cooley has written some of the very best ballads DBT has ever recorded, and songs about loss and rejection are well suited to his baritone croon. One of my favorites is "Sounds Better In The Song," an acoustic blues number with no percussion. I love how the lead vocal sounds distant, hollow, and hauntingly lonely.

Dreams are given to you when you're young enough to dream
Before they can do you any harm.
They don't start to hurt unless you try to hold onto them
After seeing what they really are.

Hood's "The Living Bubba" is one of DBT's oldest songs, and a huge fan favorite. I didn't like this song the first couple of times I heard it for some reason I cannot pinpoint. Then one day I heard it again and said, good God, what a great song. The melody is simple, there is no chorus, but there is one line that closes each verse: "I can't die now, I've got another show to do." The song is a tribute to the work ethic of Greg Smalley, an Atlanta musician who responded to the death sentence of an AIDS diagnosis by scheduling more shows than ever, playing with more bands than ever, and working his ass off until the day he died.

I'm sick to my stomach from the AZT.
Broke at my bank 'cause that shit ain't free.
But I'm here to stay, at least another week or two.
And I can't die now, 'cause I got another show to do.

I've probably heard more DBT fans call Mike Cooley's "Zip City" their favorite song than any other. Like "The Living Bubba," this song was a slow burner for me. It took several listens for it to grab me. I think the lyrics were the first thing I liked about the song. It's told from the point of view of an angry, self-absorbed seventeen year old little shithead. I love that Cooley doesn't put a sympathetic spin on this kid's perspective. He doesn't give us a back-story or any excuses for this kid'a animosity toward everyone he knows. He just tells the story honestly, just as the kid would, with all the bitterness and know-it-all bullshit left in place. And, in doing so, he makes guys like me look back at our youth and realize what little shitheads we really were. Cooley is good at that kind of thing; making you feel bad for unsavory characters by making you see yourself in them. He's better at creating empathy than any songwriter I can think of.

Just keep your drawers on, girl.
It ain't worth the fight.
By the time you drop 'em I'll be gone
And you'll be right where they fall for the rest of your life.

Hood's "Lookout Mountain" had been a fan favorite at concerts for years before the band ever recorded it in the studio for The Dirty South. This song is one of the heaviest, catchiest hooks in DBT history.

Patterson Hood once said that "Space City" is like Mike Cooley's antidote to "Zip City." I think the similarity in the names is entirely coincidental, but the juxtaposition of the lyrics is hard not to notice. "Zip City" is an unsympathetic story about a young man who takes people for granted... and"Space City" is a song about an old man who's paying for sins for which he can no longer atone. This song is beautiful, but it's hard to listen to.

My hands are as good to me as they've ever been.
I ain't ashamed of anything my hands ever did.
But sometimes the words I used were as hard as a fist.
She had the strength of a man and the heart of a child, I guess.

"Pauline Hawkins" is one of my favorite songs on English Oceans, the most recent DBT album. The piano part has been randomly popping into my head ever since I got the album. The lyrics are from the point of view of a woman who's had all she can take of the same-old-same-old.

I'm not yours to keep.
I don't want you to save me.
You're just a vacation.
A one-night way-station.

"Uncle Frank" is a just a damn good rock song. The driving melody is hooky as hell. This version isn't the original cut on Pizza Deliverance, it's an alternate version from The Fine Print, a collection of b-sides, covers, and alternate takes. The vocal is a little cleaner on this version, but there isn't a hell of a lot of difference otherwise.

The cars never came to town 'cause the roads never got built.
And the price of all that power kept on going straight up hill.
And banks around the hollow sold the lake-front property
Where doctors, lawyers, and musicians teach their kids to water ski.

One last Patterson Hood song to round it out. I don't know if "Tornadoes" is a favorite with all Drive-By fans, but it's my favorite Patterson Hood song. The foreboding and gloom in the lyrics and tempo is off-set by some beautiful guitar fills and a sparse, haunting bridge. This is the song that made me first say, shit, I think I really love this band.

The nightmare tour ended for my band and me
The night all the shit went down.
Homecoming concert, the night the tornadoes hit my hometown.
The few who braved the weather got sucked out of the auditorium.
And I can still remember the sound of their applause in the rain.
As it echoed through them storm-clouds, I swear
It sounded like a train.