Stella Artois is an InBev grocery store beer I'd never bothered to try until tonight. Here's the thing; I'm getting close to 500 reviews at ratebeer.com, and at this point I'm pretty much drinking and reviewing anything so I can hit that milestone and just get it over with. So tonight I'm drinking crap. But there is worse crap out there than Stella Artois. According to Wikipedia, Stella is nicknamed "the wife-beater" in the UK, because there is a common conception that drinking too much of this beer causes violent behavior. Drinking this beer didn't make me want to beat anyone, but while I was consuming it I did tell my cat to shut the hell up, so there's that. I guess around these parts, Stella Artois will be nicknamed "the cat cusser."

It isn’t terrible. I’ve had terrible beer, and this beer is not terrible. It pours a fizzy, bright, clear yellow. It smells like a corn based lager and it tastes like one, but there is just slightly more flavor here than most of the corn based junk. Maybe they’re using better corn. Maybe they’re using candy corn. I don’t know. I do know that I finished the glass, and I can’t say that about some expensive and popular micro-brews, so there’s that. The bottle is 11.2 ounces instead of 12. I’m not sure why. Maybe they’re skimping to pay for the extra paper on the neck of the bottle. 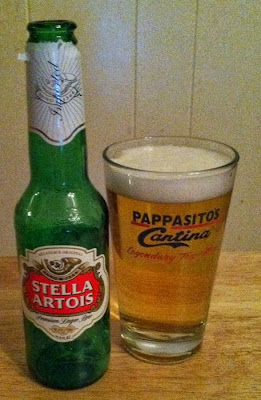