Once, when I was a kid (I'm talking 21, maybe 22 years old), me and a buddy got a six-pack of Peroni. I think that was the only time I'd had it prior to today. At the time, we thought we were really getting something special, since at the time we were used to drinking a lot of Coors and Busch and (I'm not proud of this) occasionally Olympia. When we picked up that six-pack of Peroni, we thought we were getting some fine, grade-A, high-class imported shit.

Flash forward to today. More time has passed since that day than I had been alive up until then. I've just had my first bottle of Peroni in all that time, and it's one of the worst things I've ever tasted. It pours Mountain Dew yellow with a lot of carbonation, but absolutely no head. It smells like corn. Tastes like corn. I take that back. I occasionally enjoy an ear of corn on the cob. I did not enjoy this. This tastes like something you might piss after eating an ear of corn on the cob. I drank the whole thing just as some kind of penance. Some day I can stand before the Throne of Judgement and say "I know I deserve hell, Lord, but remember ... I did drink that whole bottle of Peroni, so, we square?" 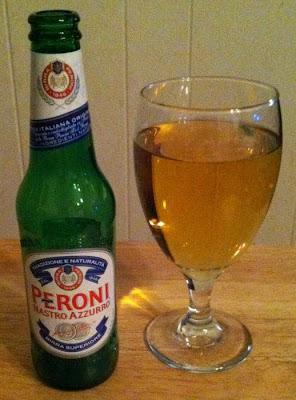