I've been curious about Mike's Hard Lemonade ever since it first showed up on shelves some years ago. I do like good lemonade. I also like beer and booze. So I pondered this "hard lemonade" thing, and I wondered if Mike's was any good. Tonight I finally got curious enough to throw a bottle into a make-your-own six-pack at the grocery store. Now that I've had it, hell, man, I really don't know what to say about this stuff. It's not bad. I mean, it doesn't taste bad. It pours and smells and more or less tastes like soda. Maybe like Sprite if Sprite leaned a little to the lemon side instead of playing it straight down the middle of the lemon-lime line. But the whole time I was drinking this stuff, I wasn't even really thinking about it. I was really thinking about Deb's Frozen Lemonade, a local business in Roanoke that makes ... you guessed it, frozen lemonade. It's tasty, too. Deb's is good stuff. I used to like to stop by their Brambleton Avenue location now and then and get a large. It was always especially good on the hottest days. I wonder if that Brambleton location is still open? I haven't been by there in ages. 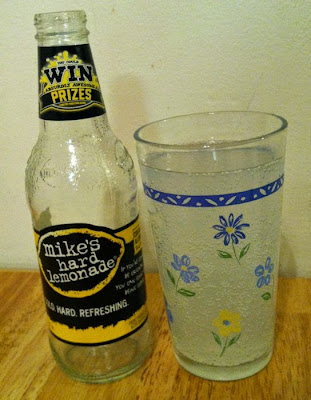 Email ThisBlogThis!Share to TwitterShare to FacebookShare to Pinterest
Labels: Reviews