I'm writing this review mostly for myself. You might want to skip it.

When I was a child, I had only a vague idea about what beer even is. I was raised in a strict, Southern Baptist home, and there just wasn't a lot of drinking going on. I did have a few uncles and neighbors who'd drink beer occasionally, though. So I knew that beer was something that was for adults, and I didn't want it anyway, because it stunk. I knew that if you drank much beer, you'd start acting silly. And I knew that if you drank too much beer, you had to go outside and walk around for awhile, and then you had to go stand behind the truck and throw up, and then you had to come back inside and go to bed.

The rest of what I knew about beer, I knew entirely from beer commercials. I was aware that there were different beer brands, and that different beers were for different purposes. I knew that some beers were for good friends to share on nights that were kinda special. I knew that some beer was to be imbibed during or after robust, outdoor activities. I knew that certain brands of beer were made for pretty people to drink on the weekend. And I knew that some beer inspired polarizing arguments between friends. To me, these commercials were cryptic, magical messages about what adulthood was like for the rest of the world. I'd watch these commercials and imagine how the rest of the world, all around my rural Virginia home, was full of good-looking, interesting adults. Adults who liked to drink beer and argue and sing and go fishing, and who never threw up behind a truck.

There was one beer that stood out from the others, though. Judging by it's commercials, there was one beer that was so strange, so completely indescribable, that the only way to convey it's effect on the human condition was with the image of a rampaging bull that tore down walls and sent people running in terror:Those Schlitz Malt Liquor commercials were ubiquitous during my childhood. There must have been a couple dozen of these commercials, but they were cookie-cutter one-act man-against-nature melodramas. Each commercial featured someone who was happy and looking to celebrate a recent accomplishment of some sort. In each commercial, the happy guy would ask a bartender or waiter to bring him a celebratory beer, only to be encouraged by friends to instead have a Schlitz Malt Liquor. "Don't say beer," the friends would shout, "say Bull!" And each commercial ended with the celebrant ordering a Schlitz Malt Liquor, only to have the entire establishment destroyed, in an act of spontaneous violence, by a furious, wild-eyed, wall-busting bull. The bull would appear from out of nowhere, apparently called forth like a demon by the first sip of Schlitz, and its path of destruction would always send everyone into a blind, primal panic.

I'd watch these commercials and think, holy shit! If regular beer causes people to act silly and then puke, what must Schlitz Malt Liquor do to people? I always imagined people waking up after one glass of the stuff to find themselves surrounded by dust and rubble and sirens and the wailing of the innocent. And I never, until tonight, had the guts to try the stuff.

Tonight, one more childhood wonder has fallen by the wayside.

Schlitz Malt Liquor, it turns out, is just another highly carbonated, yellow, foamy American beer. It's almost indistinguishable from any other mass-produced, adjunct corn lager. Now, it might be entirely in my mind, but I do have to say that I picked up on a little more alcohol in the aroma and in the flavor. The can says it's 5.9% ABV, so I guess it's a hair higher than the other convenience store beers, but not in the same league as some of the stuff they seem to be marketing to fratboys these days. There's nothing noteworthy in the flavor, other than that hint of alcohol. There's corn, and more corn, and that's all. There does appear to be a slight... very slight ... bit of alcohol vapor at the end of the sip. It evaporates as quickly as the aroma and flavor, taking all of that artifact childhood fascination into the ether with it. This is a can of empty promises, and it ought to be regurgitated behind a truck.

I won't be having Schlitz Malt Liquor again. Not because it doesn't smell good, and not because it doesn't taste very good, and not because it's boring. All of that is true, don't get me wrong. But the reason I won't be having it again is because of what the actual experience of drinking it does to my childhood. The Schlitz Malt Liquor bull did not materialize in a cloud of cinder-block-dust and horror when I took my first sip. The foundation of my home remains in tact tonight. No one on Donovan Street was sent, terrified, into the recesses of the night. The only thing torn down by this beer, once again, was my lingering hope that "adulthood" is waiting, just on the other side of the wall. 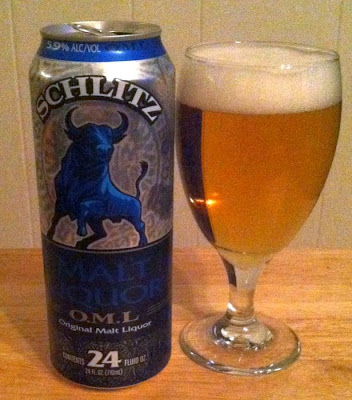