I'm kinda sheepish about reviewing whiskey at this blog. Reviewing beer is easy. Well, if not easy, reviewing beer is at least inconspicuous. I'm only one more of a billion hipster asshole geeks ranting about beer on the internet, so if nothing else, at least I blend into the din. And there are an estimated sixty-eleven new craft breweries popping up in this country every week, so there is no shortage of beer for us assholes to rant about. I mean, why not ramble about beer on the internet at this point?

There's the rub. All I can really tell you about whiskey is what I like. And, besides, I'm a lot more conservative about whiskey than I am about beer. I don't try new stuff that often, and when I do, I try to sample it several times before I even consider writing anything about it.

I am surprised, though, that it has taken me this long to write a review of Maker's Mark Kentucky Bourbon, my go-to bourbon and something that has become a staple 'round these parts. Maker's Mark is the whiskey that made me like whiskey in the first place, so I should have reviewed it some time ago.

Unlike the medicinal, minty cheap stuff that was once all I knew of bourbon, Maker's Mark is just a delight to sip. It's smooth and sweet, but very balanced. The aroma and the flavor are both outstanding, but there is enough difference between them to give this stuff some serious complexity. In the nose, Maker's Mark is all candy and fire. Vanilla and butterscotch notes dominate the aroma, along with vaporous booze.

There is more sweet stuff in the flavor, but it's more complex. Caramel, honey, kind of a burnt creme brulee thing, and then this big, bold rush of oak and a heady blast of alcohol. The mouthfeel is just about perfect; it isn't thin, but it isn't cloying, either. Each sip hangs around just long enough, and each next sip is welcome.

I'll probably never be a whiskey expert, I don't drink enough of it to talk about it with much authority at all. But I do know what I like. Templeton Rye is my favorite, and I'll order it when I have the option. But Maker's Mark is easier to find, and never a disappointment. I buy it when it's my best option, but I'd never say it's something I only settle for. 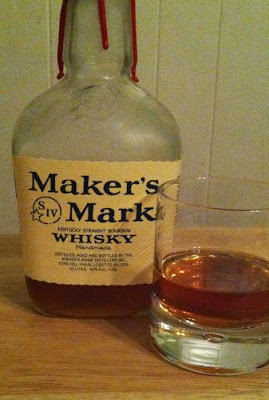