Over the past year I've come to love American brown spirits, most specifically Maker's Mark bourbon and Templeton Rye. That Templeton, in fact, is probably my favorite liquor of any kind. But I've reviewed very few whiskeys at the blog because as much as I like what I like, I don't try that much different stuff and don't have nearly the frame of reference that a lot of guys do. Still, I guess, the only way to develop that kind of context is to keep trying different beverages, and I might as well record my thoughts here when I taste something new.

Tonight I picked up a bottle of Russell's Reserve six year old rye, form the distiller's who make the more common and less interesting Wild Turkey bourbons. I'm not much of a Wild Turkey fan, to me there is little to distinguish Wild Turkey from the other liquors on the middle shelf. But Russell's Reserve Rye is better, and while it isn't going to become a favorite of mine, I'll certainly enjoy this bottle.

Russell's Reserve pours very pale amber and has a sweet, mild aroma. This rye doesn't really distinguish itself in the nose, especially when compared to Catoctyn Creek's Rye, with it's huge rush of butterscotch and caramel. The flavor of Russell's Reserve is milder and more ... well, reserved ... than I'd have expected from a 90 proof whiskey. There's the spicy rye I expected, and some oak and honey notes, but none of it is particularly pronounced. Templeton is more complex and richer, and will remain my rye of choice. But I do like Russell's Reserve better than Knob Creek's rather burned and overly polished rye. On a five scale, with Templeton and Catoctyn Creek tied at solid fours, I'd give Russell's Reserve a decent three or three and a half. 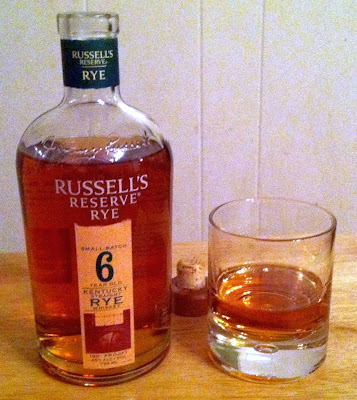