Victory's double IPA, DirtWolf, was the IPA hype of the year for 2013. In my opinion, it's good ... but it's just one more good IPA. It pours bright and crisp lemon yellow with average head/lace. The aroma is pineapple and dirty socks, which is nice if you enjoy a tangy/dank combo. The flavor is strong west coast hops. People talk about hop complexity with this one, but I don't get it. It's all west coast. It's good, don't get me wrong. Citrus, pine, and a breakfast grain malt. I'd drink it again, but it isn't in the same league as Stone's Ruination, Bell's Two Hearted Ale, Avery's Maharaja, Troeg's Nugget Nectar, Hoppin' Frog's Hop Dam, Russian River's Pliney the Elder, and most definitely not as good as Stone's delicious Enjoy By regular offering. 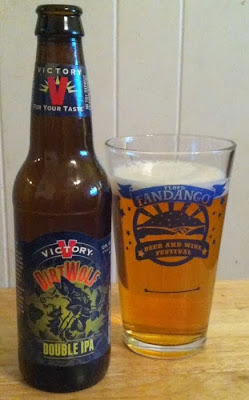