Dogfish Head's Immort Ale Barley Wine is big beer. This stuff is a bright copper color with a filmy head that leaves no real lace. I wasn't in love with the aroma but liked the taste much more, and it's a little bit unusual for me with barley wine to find much distinction between the smell and the flavor. There's a muted, kinda plastic quality about the aroma that I found a little off-putting. It was like I was smelling the beer through a plastic mesh. The flavor is strong. Big malt, some smoke, some of that juniper and vanilla coming through, too. This beer is actually less sticky than many (maybe most) barley wines; I'd expected that maple syrup mentioned on the label to show up in the finish, but I never really detected it. Not the best thing I've had from DFH, but pretty good. I didn't taste the 11% ABV, but I felt it, I felt it early, and I felt it hard. At this time of year, with Mad Elf everywhere, I come to think of beers just a hair north of 10% ABV as session beer. This is not session beer. 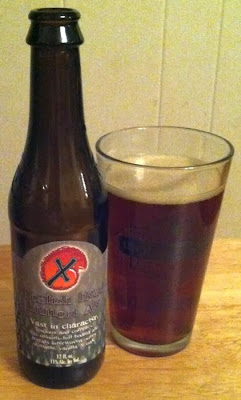